Heidegger's 1940 course and the original manuscript version, preserved at Marbach, of his lecture of June 1938 on the image of the world reveals to us that, during that period, he is far from radically rejecting the «metaphysics of the subject», as he will do af¬ter 1945. Indeed, he sets up an opposition between two notions of the subject: one degererate (entartete) and the other perfected. For Heidegger, Descartes' philosophy of the self and of individualism are once again nothing but a «degeneracy» (Entartung) of the self-affirmation of man as subject, while the battle for the community of the people constitutes the sole achievement giving the Subject new meaning. Once that has been perceived, it becomes possible to read with more stringency the texts of the years 1939-41, such as the Notes on Jünger (Gesamtausgabe, vol. 90), at the moment when the Hitler-Stalin pact is concluded, to Heidegger's delight. This time, it is race that is related to subjectivity, the latter being understood as «self-affirmation» (Selbstbehauptung) and struggle for worldwide domination by the formation of a «new humanity», and by racial selection and breeding. These various writings on subjectivity, community and race constitute not a critique, but a cold legitimization of National Socialism. 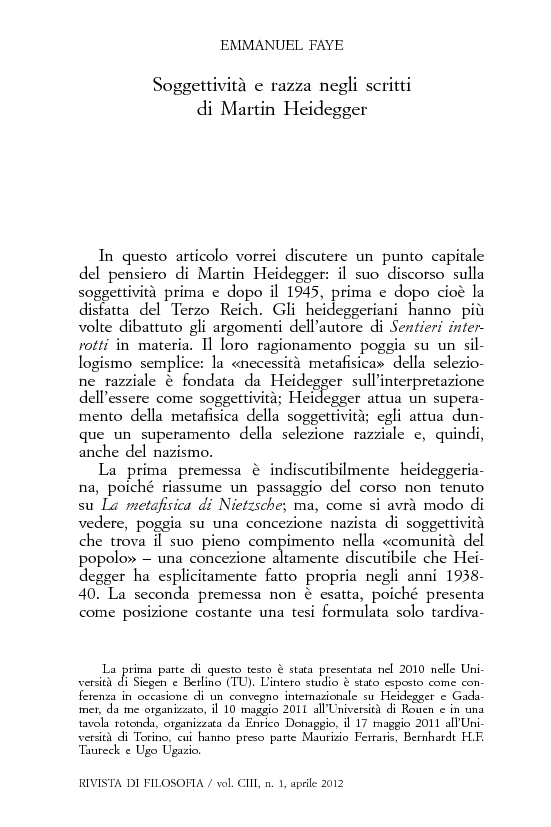