How far can a biological theory be integrated, corrected, reshaped in order to keep in tune with ongoing research? As a matter of fact, much research in evolutionary biology goes on irrespective of historians' concern for «what Darwin really said». The theory of «common descent by modification through natural selection», as Darwin named it, is to most of them more a general (and often generic) framework than «the» theory to work by. More than that, «Darwinism» has meant different things to different people, including self-styled supporters, from the beginning, and some of the objections that were levelled against it as early as the 1860s have received no final answer yet. Those who still see natural selection as the main mechanism of evolution often disagree as to whether it acts mainly, or exclusively, on genes, on individuals, on species or on whole taxa. According to others, the role of natural selection has been overestimated. Alessandro Minelli, a specialist of Evo-Devo (the evolutionary study of development), contends that Darwinism must be readapted to the moving landscape that is emerging from the comparatively recent developments of research in evolvability and the constraints to which the production of new forms is subject. Nobody can predict what the outcome of this re-adapting will be. From an opposite perspective, Massimo Piattelli Palmarini, a specialist of the biological study of language, claims that adaptation and natural selection play only a marginal role in evolution, and virtually none in evolution at species level. The time has come to to «turn over a new leaf». Both, however, agree in rejecting the idea that evolution can be explained merely in terms of successful genes or combinations of genes. Moreover, which is more important for philosophers, they by no means indulge in teleological speculation as an alternative. 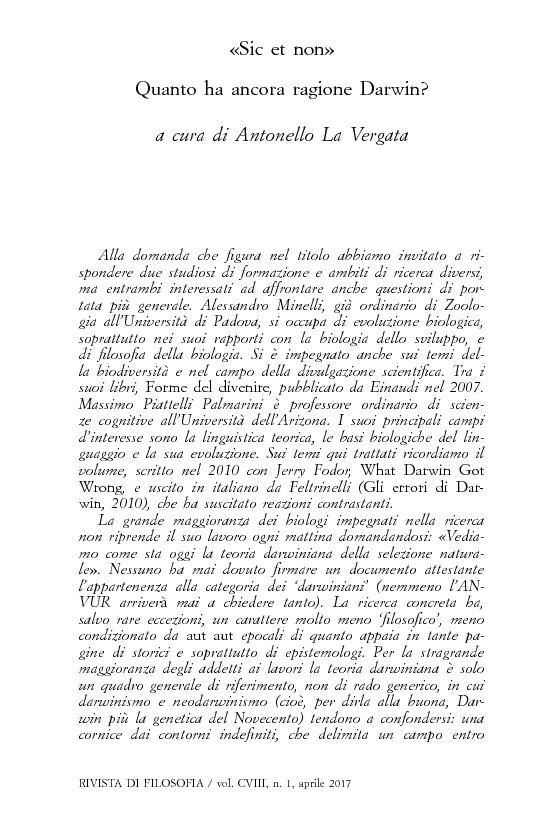