This article is aimed at examining the meaning and the functions of the traditional requirement of State practice in the field of international human rights law. It is divided into three parts. In the first part (par. 2), a critical overview of some theoretical approaches followed by international legal scholars is provided. In this context, particular attention is paid to the thesis advanced by Simma and Alston (in a seminal article published in 1988), according to which general international human rights law would be basically constituted by principles, rather than by customary rules. The second part consists of four paragraphs, where an analytical (and critical) assessment of the main trends in the recent case-law of some international tribunals is carried out (International Court of Justice: par. 3; International Criminal Tribunal for the Former Yugoslavia, Special Tribunal for Lebanon: par. 4; Inter-American Court of Human Rights: par. 5; European Court of Human Rights: par. 6). In this regard, it is submitted that - however it appears - the traditional requirement of State practice does not fit the legal reasoning of the said tribunals, with the exception of some cases concerning the conflict between human rights principles and traditional customary or treaty rules (i.e.: the conflict between the right to access to justice and the customary rules on State immunity or the treaty rules on the immunity of international organizations). In the third part (par. 7), it is argued that: (a) international tribunals make use of the practice requirement in order to identify general principles instead of customary rules; (b) these principles are not grounded in a «consensualist» reasoning (at variance with the opinion of Simma and Alston); (c) such principles take the shape of general principles of international human rights law, instead of general principles of international law (at variance with the opinion of Simma and Alston). 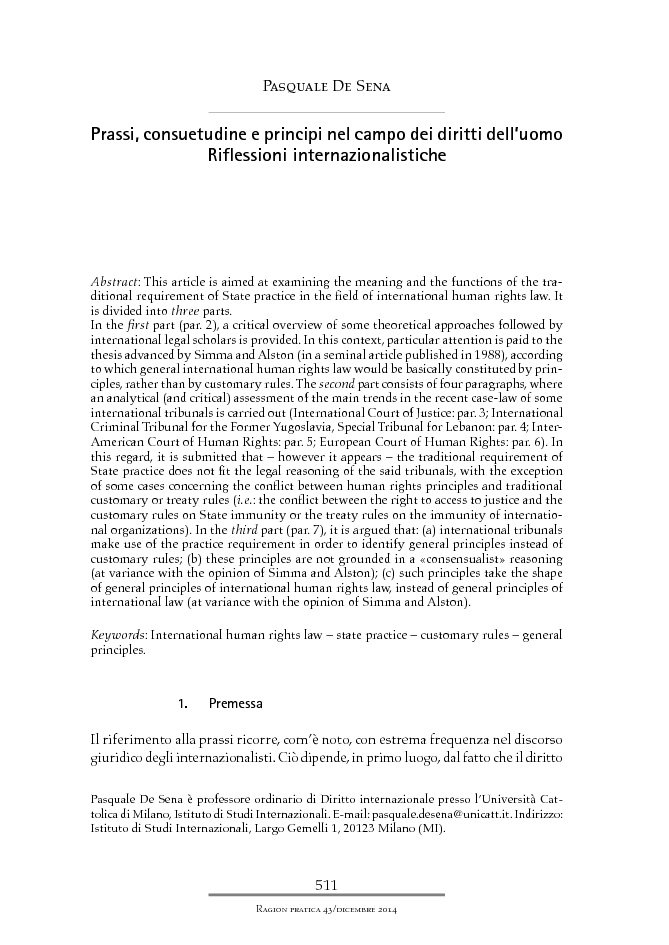