We are confronted today with a crisis of modern secularization as theoretical space within which the main concepts of politics (subject, State, sovereignty, people, society, representation, constitution, revolution, progress, order, unity, citizenship) acquire their meaning and shape. After the modern 'great distinction' between politics and religion, multiple and conflictive instantiations of the divine are again struggling for direct political influence in national and global spaces. The radical problem is not that much 'fundamentalism'. It is rather that these instantiations of the divine are made real and politically effective by the plain circumstance that millions of women and men find in them the meaning of their lived experience. In so far as religion seems to be again crucial in providing "meaning" to life in Europe and the world, the "critique of religion" turns once more into being an urgent theoretical and political task. And this is particularly true for any attempt to go beyond modern political language and concepts while maintaining freedom and equality as basic criteria of thought and action. With this awareness and keeping this aim in mind, the essays collected in the current issue of «Filosofia politica» exemplify some of the many possible modalities of a critical analysis of the new relation between religion and politics: Catholic church and bioethics (R. Mordacci); "Islamic feminism" in Europe (R. Pepicelli); the political theology of exodus and its ambivalence (E.S. Glaude); the governmental rationality of "minorities" management in India (R. Samaddar). 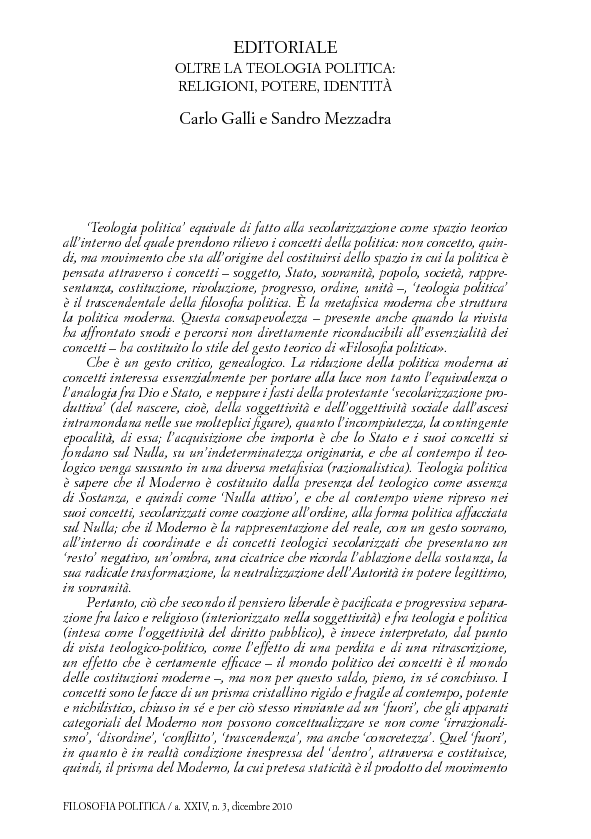