During the last years, many scholars - among them, A. Sen, awarded with the Nobel prize in economics - have been suggesting that happiness should be assumed as one of the indicators of the wellbeing of a country. This proposal suggested an inquiry into the concept of happiness, that is the subject around which both the present and the next issue (1/2013) of «Filosofia politica» are organized. The history of the concept is focused on the early modern age, when happiness is not anymore the telos of the wise, or an ideal divine perfection, but something to be pursued into the real world, with the means available for a man who brings his fate in his own hands. In order to distinguish between the happiness of the governed and the happiness of the governing, the first essay is focused on the Rome felicitas, represented by imperator Sylla (G. Carillo), while the second one analyses Hobbes' conception and the debate of his time (A. Taraborrelli). The late 18th century English context is read as the fertile soil for an individual notion of happiness, which progressively spread over continental Europe and developed into the right to «the pursuit of happiness» of the American Declaration of Independence. In that same period, the articulation of the concept by the French Enlightenment (M.L. Lanzillo) and by Robespierre (C. Vetter) would then have paved the way for the principle of the greatest happiness for the greatest number and for a collective understanding of happiness. 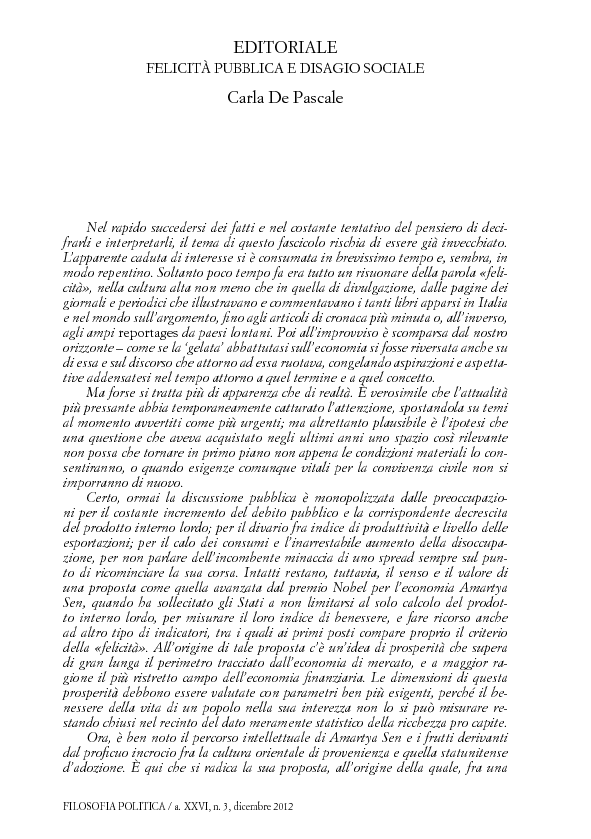