The present paper deals with the acquisition of gender in Italian and French by monolingual and bilingual children. In our study, which is based on the data of five children, we focus on the gender marking on articles, because gender is most frequently marked on these elements. We claim that the Italian gender system is easier to acquire than the French gender system. This is because the formal properties of Italian nouns and other gender marked elements are very transparent - more transparent indeed than the formal properties of the corresponding French elements. This transparency can explain the early and correct use of articles in Italian, as compared to French. Interestingly, a difference between the two languages is not revealed in the comparison of monolingual data. Apparently, the time span within which the children master the gender systems of their target-languages is so short that it is hardly visible. It is, however, visible in the data of the bilingual children, who acquire Italian or French simultaneously with German. The analysis of gender agreement on articles shows that Italian bilinguals have only slightly lower accuracy rates than monolingual Italians, whereas a significant difference is revealed in the comparison of bilingual and monolingual French children. We assume that the bilinguals are not less proficient in mastering their gender systems but they need more time, which is why their phase of learning becomes visible. It is suggested that this delay is not directly related to the second language, but indirectly in the sense that the children have less input in each of their languages. Apparently, this has an impact on children acquiring French, but not on children acquiring Italian. 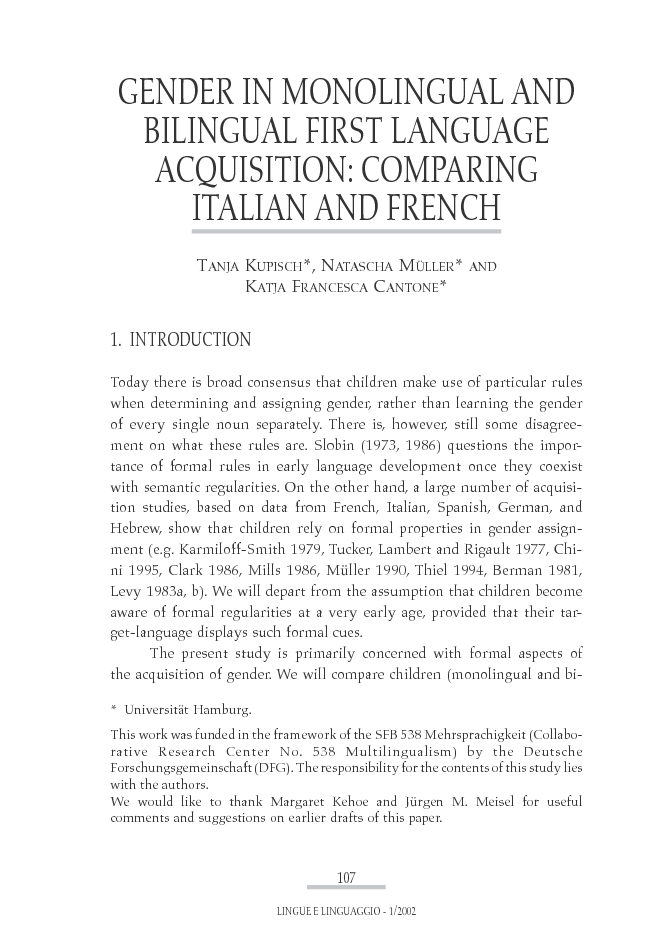