This paper1 draws a comparison, based on semasiological and onomasiological evidence, of three Modern Greek (MG) suffixes "-in(όs)",2 "-iátik(os)" and "-ίsi(os)", which form denominal adjectives of time and/or space. Following Corbin's model (1987, 1991, and forthcoming) of Construction Morphology, an in depth analysis of the semantics of these suffixes will be presented. The results suggest that, in order to construct a denominal adjective following a relational "Lexeme Construction Rule" (LCRREL), categorical, semantic and pragmatic compatibilities are to be enforced between the base noun and the suffix, as well as between the suffixed adjective and its noun head in the embedding noun phrase (NP). Most notably, there are no two synonymic outputs of the rule, even when the same noun is used as a base noun. The three suffixes differ with respect to their semantic and pragmatic features; as a consequence, they are used in different contexts and text genres. The comparative cross-examination of the three suffixes, which is possible thanks to an onomasiological investigation (Baldinger 1964, tekauer 1998), permits the formulation of phonological, morphological, syntactic, semantic and pragmatic predictions, which constitute part of the tacit speaker knowledge. Data are drawn from many dictionaries and text sources, and especially from the "Reverse Dictionary of Modern Greek" (Anastassiadis-Symeonidis 2002) as well as the "Corpus of Greek Texts" (Goutsos 2003). 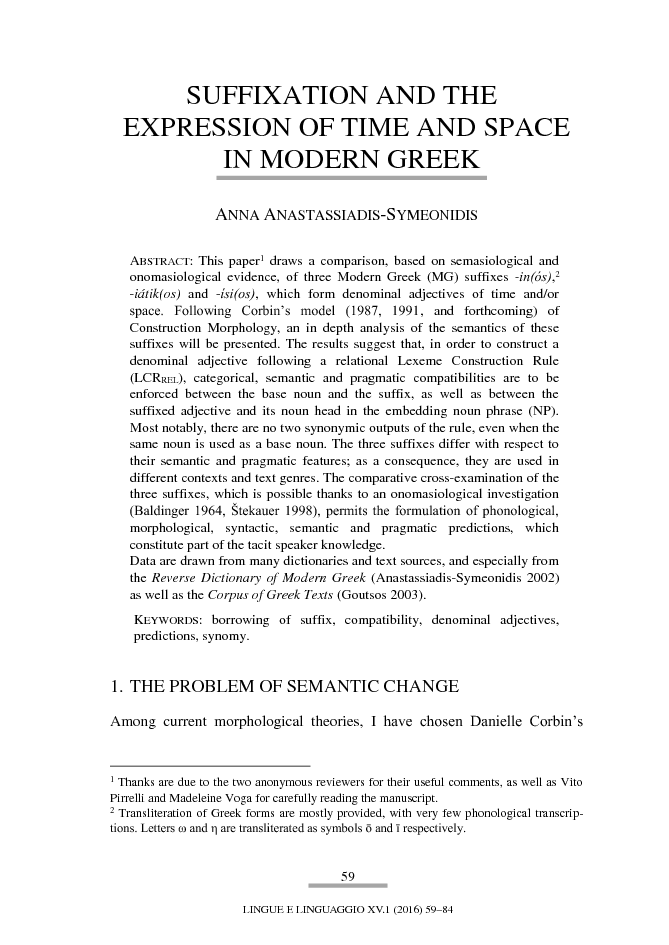