The Gradual-Troparium-Sequentiarium-Kyrial preserved in Acqui Terme's Biblioteca del Seminario with the signature Ms. I, till now almost unknown, is a manuscript assigned to the first half of the XIIIth century and of an uncertain geographical origin; nevertheless the musical notation and the tradition at least of the twenty five sequences place it in the North-western Italian area, while it is difficult to identify the "scriptorium", certainly not peripheric but very specialistic, with clever copysts and experienced illuminators. At first the essay analyses two sequences of special interest for various aspects concerning the textual and musical tradition. The sequence "Rex nostras Christe", originally of western France with the melody of the notkerian "Congaudent angelorum chori" and hand down by a Xth century Münich's manuscript, appears also in the Italian area in two different versions, the Bobbio's one represented by codexes F IV 18 e G V 20 of Turin's Biblioteca Nazionale Universitaria, and the beneventan one, testified by codexes 38, 39 e 40 of Benevento's Biblioteca Capitolare. Even if the textual tradition of the Acqui Terme's codex has some links with the first version, it is much more near to the second one, as the variants and particularly the doxology demonstrate. The sequence "In honore Mariae", with the melody of "Victimæ paschali laudes", has only a textual concordance in the Turin's codex F IV 18. Both appears as a successive addition to the compilation of the manuscript. In this case much more obvious results the link between the Acqui Terme's source and the Bobbio's monastery, the only one in which the sequence "In honore Mariae" was sung, anyway without forgetting the absence or the missing of Bobbio's manuscripts of the first half of the XIIIth century. Another interesting element is a later addition, presumibly of the second half of the XIIIth century, containing the trope of the Sanctus "Omniparens", probably Aquitanian, here testified in a little different textual version and setting for two voices. It is an unknown composition, which comes to be a new witness of the XIIIth century Italian polyphony. Important details of the Sanctus are: the interval of fifth, which calls to mind the "discantus quintizans"; the structural use of the contrary motion; the unmechanical employment of the "Stimmtausch", and the large final code on the last Osanna. The integration between the two voices creates a real "cantus planus binatim", not intended as an execution of two voices, but as the result of a bivocal projection of the liturgical melody. In spite of single elements in common with many compositions of the XIIth-XIIIth centuries Italian liturgical repertory in simple polyphony, as the Sanctus of Bologna's Civico Museo Bibliografico Musicale ms. Q 11, on the whole the result seems inedited and deserving to be more investigated. 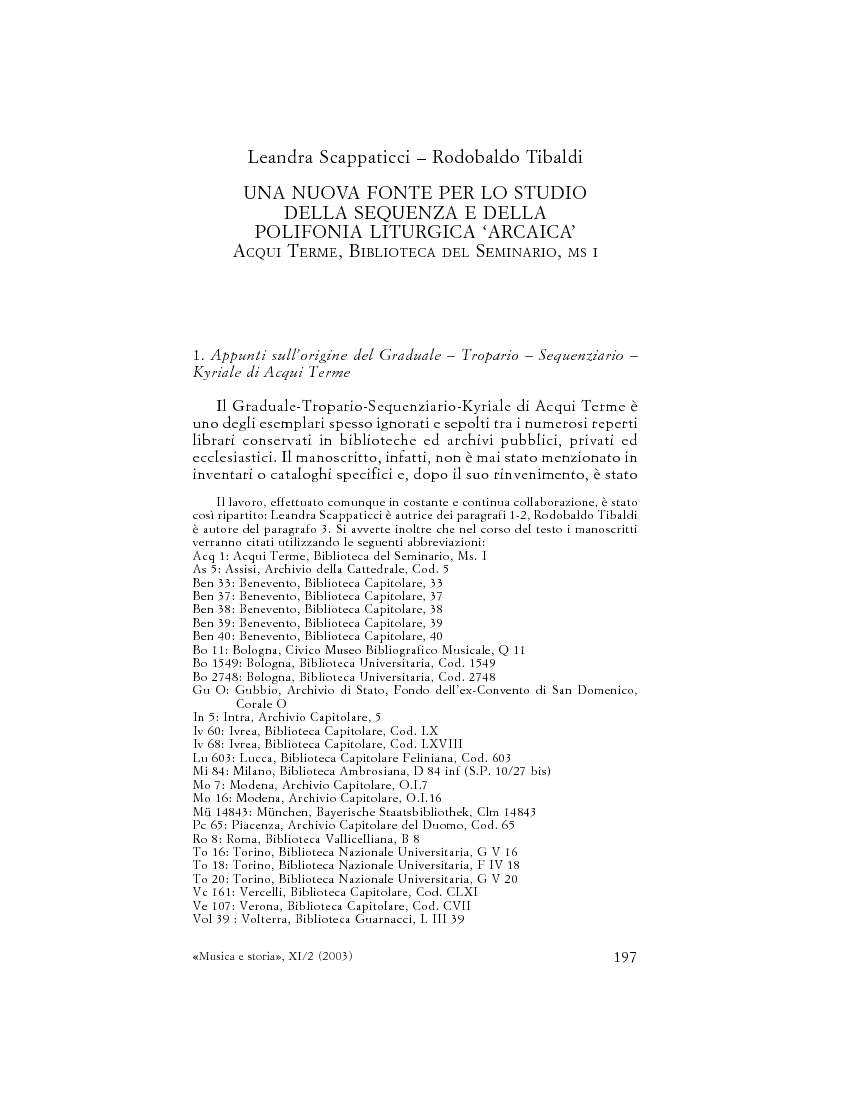