The subject is the study of the history of psychological thought regarding a text, unknown in Italy, which collects the reflections of Adelbert Ames jr., a researcher on perception, who wrote very little, but who, nevertheless, gave shape to exemplary perceptual conditions like the Distorted Room and the Rotating Trapezoidal Window. The text, entitled "Morning Notes of Adelbert Ames jr.", published in 1960 five years after his death, contains arguments which recall the thoughts of other researchers like Metzger and Gibson. Although these scholars worked in very different places and in different conditions they formulated their ideas and reflections in the same years that Ames collected his "Morning Notes". While Metzger's line of thought derived from a text which was basically theoretical and well known in Italy, Gibson's first important results were experimental in nature and originated from "Aviation Psychology Program Research", published by the Army Air Force in 1947, a text which was not familiar to Italians. The idea of comparing the thoughts of these two scholars may appear a little unorthodox, given the radical differences in their interpretation of perceptual facts. In spite of this, however, they both share the same basic curiosity for the same problem, as well as the ubiquitous discovery of an important perceptual phenomenon, namely amodal presence. Moreover, Gibson's first experimental works not greatly differed in opinion from the reflections of Ames. The work terminate with a reinterpretation of two demonstrations - i.e. the Distorted room and the Chair demonstration - that is based on the theory of non-accidental properties. 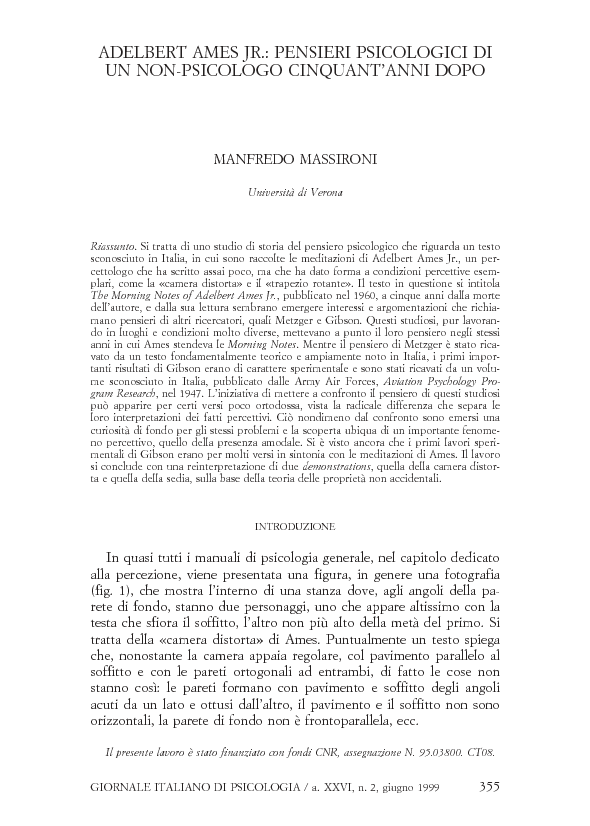