Recent evidence has shown that performance of patients with unilateral spatial neglect, a neuropsychological condition in which deficits in awareness and exploration of the contralesional side of space emerge after brain damage, improve after a short period of adaptation to wedge prisms (Rossetti et al., 1998). In this study we investigated, in a spared functioning system, the potential influence of the prismatic power in determining the observed effect. Ten aged neurologically unimpaired subjects underwent adaptation to left basis prismatic lenses of 5, 10 and 20 prismatic dioptres. Three measures were used to assess the effect of prismatic adaptation: subjective straight ahead (SSA), open loop pointing (OLP) and line bisection (LB). The three measures were acquired before, immediately after (post condition) and 10 minutes after adaptation (late condition). In line with previous studies, prism adaptation resulted to be effective only in two measures: SSA (in both the post and the late conditions) and OLP (in the post condition); however an effect of prismatic power emerged only in the OLP measure: the bigger the visual rightward shift, the bigger the leftward aftereffect. The results suggest that the physical features of prismatic lenses play a role in the effectiveness of prismatic adaptation, but also that visual feedback, which is different in the three measures used, is critical in determining the emergence and the amplitude of the prismatic adaptation effect. 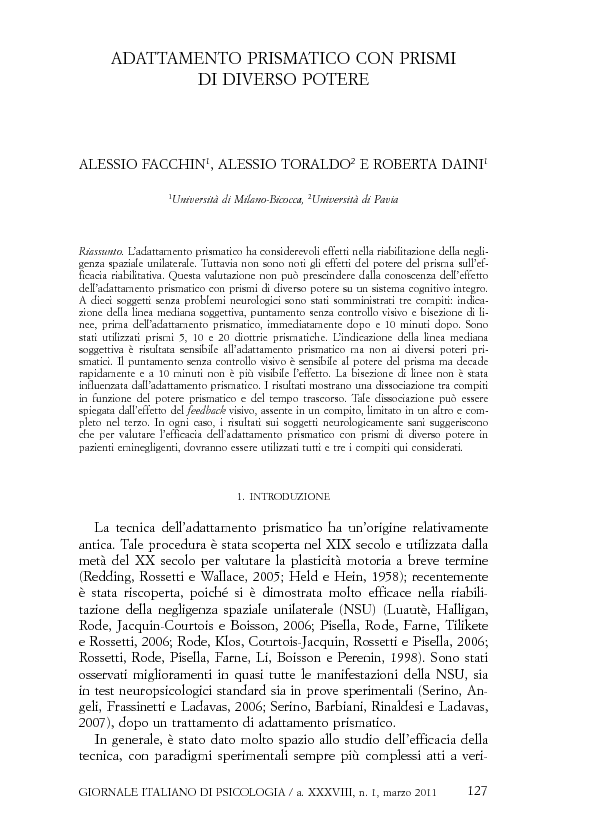