The pandemic influenza H1N1 2009 outbreak hit Italy on Winter 2009. Sev- eral public health education campaigns were implemented by national and local health authorities. The main aim of this study was to evaluate the effectiveness of a public campaign implemented by Italian Ministry of Health, «Topo Gigio», the lead character of a children's puppet show on Italian television (translated as «Louie Mouse»). A total of 689 adult Italians were interviewed by telephone between 16 and 19 February 2010. The survey instrument included demographic data, measures on risk perception, worry, trust, recall of educational campaigns and compliance with recommendations for pandemic influenza H1N1 2009. Results showed that 84.9% were able to recall «Topo Gigio» campaign. The recall of «Topo Gigio» was significantly associated with compliance to recommendations. The effect of «Topo Gigio» campaign on compliance to recommendations was mediated by risk perception but not by affective responses. Trust in the Ministry of Health was associated with the perception of utility of the campaign controlling for trust in institutional response to the outbreak. 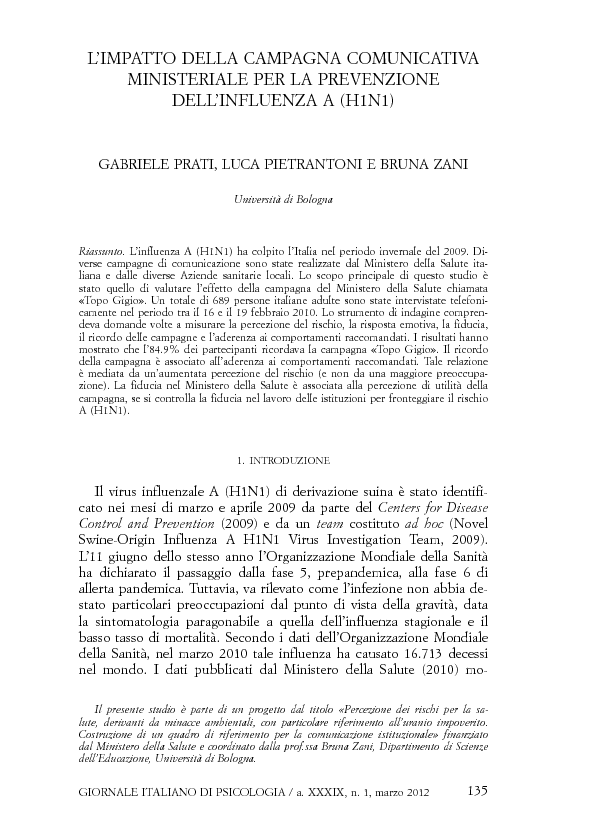