Tax evasion is a serious problem in many countries and has received increasing attention by academics of different disciplines. Over the last decades in social and economic sciences, several experimental and survey studies were conducted but no standardized questionnaire prevailed. In 2010 the TAX-I (Kirchler e Wahl, 2010), a standardized inventory in German language (and translated in English), was published. The TAX-I assesses tax evasion, tax avoidance, voluntary and enforced tax compliance. This paper presents the translation and validation of the TAX-I in Italian language for further usage on Italian samples. Following the theoretical assumptions of the slippery slope framework (Kirchler, 2007; Kirchler, Hoelzl e Wahl, 2008), three additional scales were added to the original scales of the TAX-I: trust in authorities, efficacy/legitimate power and coercive power. After a pretest of the translated version on a sample of N = 45 self-employed Italian taxpayers from Alto Adige in Summer and Autumn 2009, the resulting seven scales with five items each were tested on a sample of N = 344 (resulting in a final sample of N = 389) self-employed taxpayers and entrepreneurs from different Italian regions in 2010. The results of the validation with factor analysis and reliability-analysis were satisfactory. The Italian items are provided in the present paper to stimulate further research on the psychology of tax compliance in Italy. 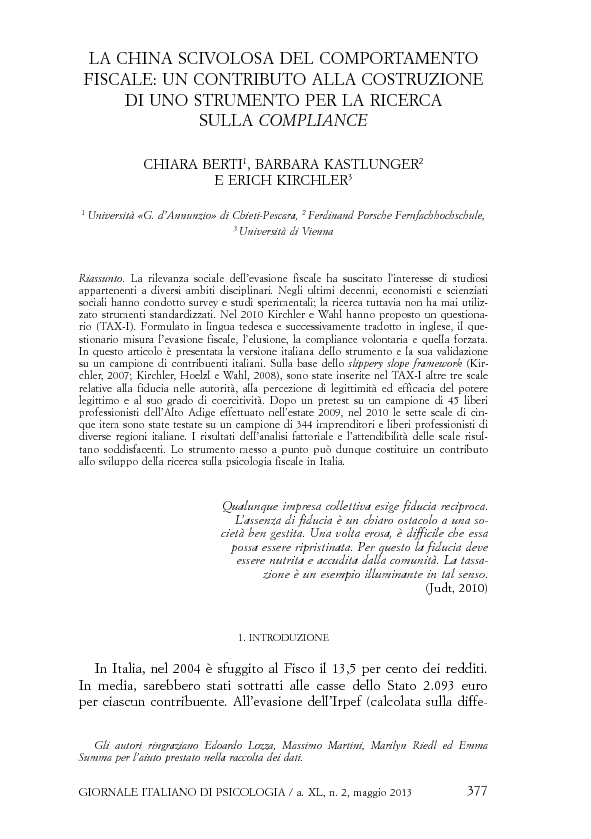