A system of categories for observation and analysis of hand gestures produced within small groups is proposed and evaluated. The taxonomy is based on the fundamental criterion that gestures can, or cannot, be strictly linked to verbal language. Specific aims are: (1) empirical evaluation of taxonomy through inter-rater agreement; (2) evaluation of taxonomy within interactive contexts, such as that of small group, different from those traditionally used in this field of investigation (dyadic contexts); and (3) presentation of preliminary empirical evidence, as a test of the adopted taxonomic criterion. 36 female university students (mean age 21 years and 4 months) participated to discussion groups of 4 or 8 members. Results show taxonomy: (1) allows a correct individuation of gestures occurrence (agreement = 86%) and a correct attribution to them of system's specific categories (K = .94); (2) identifies two new cohesive gestures ("tray with one hand" and "tray with two hand") previously absent in literature; (3) confirms the importance of the link among verbal language and gestures as the basic taxonomic criterion, showing cohesive gestures, although less studied in the literature, are the most frequent ones (60% of total) with respect to all others (emblematic, illustrator, adaptator) and they result to correlate with the amount of turns produced by the communicator (r = .76, p < .001). 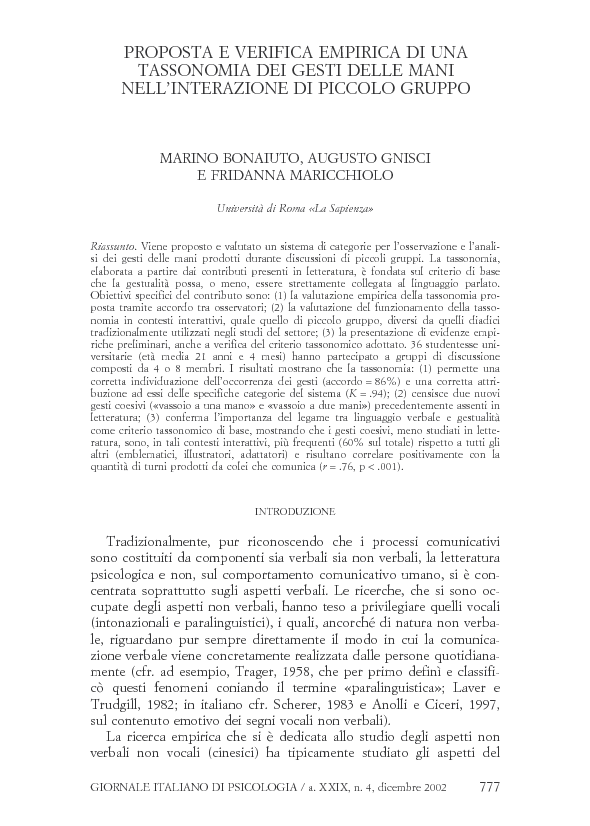