Baron-Cohen (1994) proposed an innate functionally specific mechanism (defined Eye Direction Gaze-EDD) to detect the presence of eyes and their direction to different targets in the environment. A first support for this mechanism was provided by Hood, Willen, and Driver (1998), showing that the perception of an adult's deviated gaze induces shifts of attention in the corresponding direction, fairly early in development. More precisely, Farroni, Johnson, Brockbank, and Simion (2000), found that infants are influenced by direction of perceived gaze to shift their attention but only if the movement of the pupils is perceivable. If the EDD is innate and if there is a cue effect of the eyes because of the movement of the pupils, the same effect should be present at birth. One experiment was carried out using cueing paradigm (Hood et al., 1998). Newborns were shown an image of a schematic face, which first blinks its eyes and then looks either to the right or to the left. This was followed by a target, which appeared either to the same side where it looked or in the opposite direction. Saccadic eye latencies (RTs) were measured and showed that infants are faster to make saccades to peripheral targets cued by the direction of eye movement of a central face. This result confirms that the gaze direction can be used as an attentional cue also in newborns, at least when the movement of the pupils is visible. 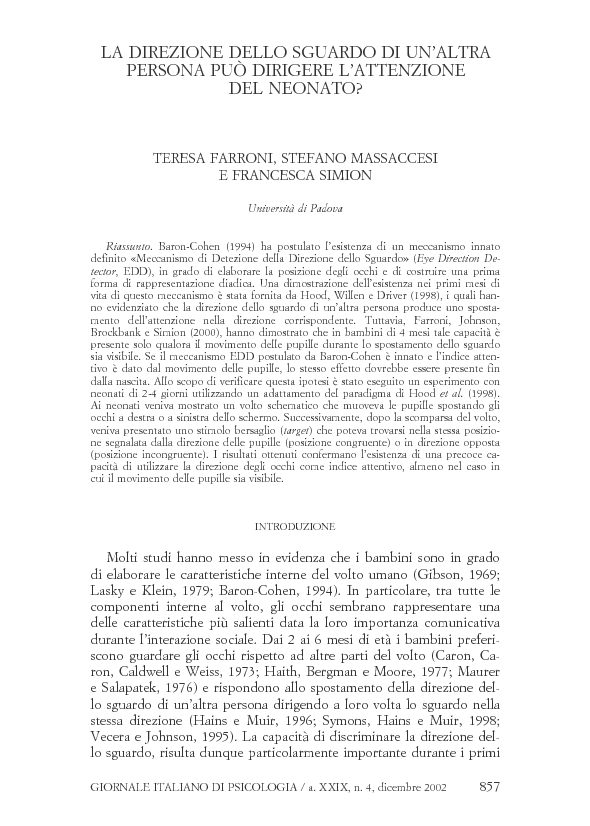