Imagine to reach towards and grasp an apple from a bowl. Different final intentions can guide this action. For instance, we may want to eat the apple or, alternatively, to smell its odor. Well before the hand makes contact with the object, the kinematics of our reach to grasp movement reflect what we intend to do with that object. Now, imagine one observing us reaching for the apple. If asked, would she be able to predict whether we are about to eat or to smell from it? Recent results indicate that observers can foresee how an action would unfold from using the intention-related information that is available in movement kinematics. Thus, at least in some circumstances, what others think becomes visible and accessible to a passive observer. This viewpoint on the relationship between the agent and the observer strongly reminds the interplay between performance and spectatorship in performing arts. Quite often what is onstage should seem «as if» the actions were really taking place; however Juliet is not really drinking the poison and yet she really goes into a catatonic state. But how is this possible? Does the actress act «as if» she thinks and feels what Juliet would actually think and feel? These and similar questions have been at the core in a workshop during the last edition of the «Festival della Scienza» in Genoa. The present paper captures some of the main steps of that event to show how expressive potential of body movement spans well beyond the interests of experimental research. 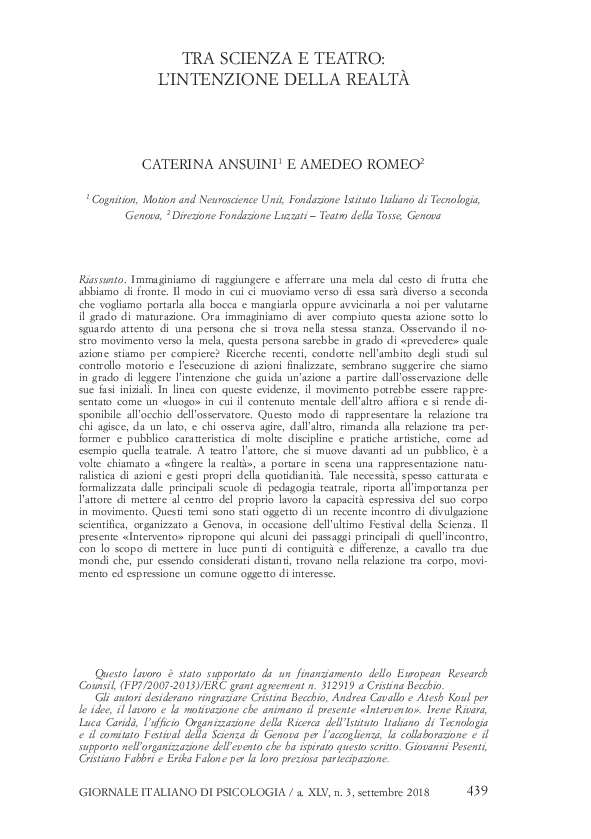