The current historiography traces back to Ardigò the original inspiration of a project for the establishment of both an academic course and a laboratory of experimental psychology at Padua University, whose implementation eventually coincided with the arrival, in 1919, of Benussi. As regards the situation that Benussi found, mostly anecdotal and partially contrasting sources maintained, on the one hand, the complete lack of facilities for experimental research and, on the other hand, that Benussi inherited a first set of instruments originally acquired by Ardigò, which stayed unused for about twenty years. In the present paper, an attempt to reconstruct the state of experimental psychology in Padua before 1919, based as much as possible on documents, is provided. The role of Ardigò, the involvement of his pupils and of institutions such as the Pedagogical Museum (Museo Pedagogico), the Laboratory of Anthropology (Gabinetto di Antropologia), both the Institutes of Physiology and Electrotechnics, some of which transferred instruments directly to Benussi, is described. Ultimately, a polyhedral and receptive cultural context emerged, within which the beginning of the Laboratory of Experimental Psychology (Gabinetto di Psicologia sperimentale) was favored. At the same time, the traditional version tracing back to Musatti regarding the complete lack of instruments and facilities that Benussi would have found at the beginning of his career in Padua, is questioned. 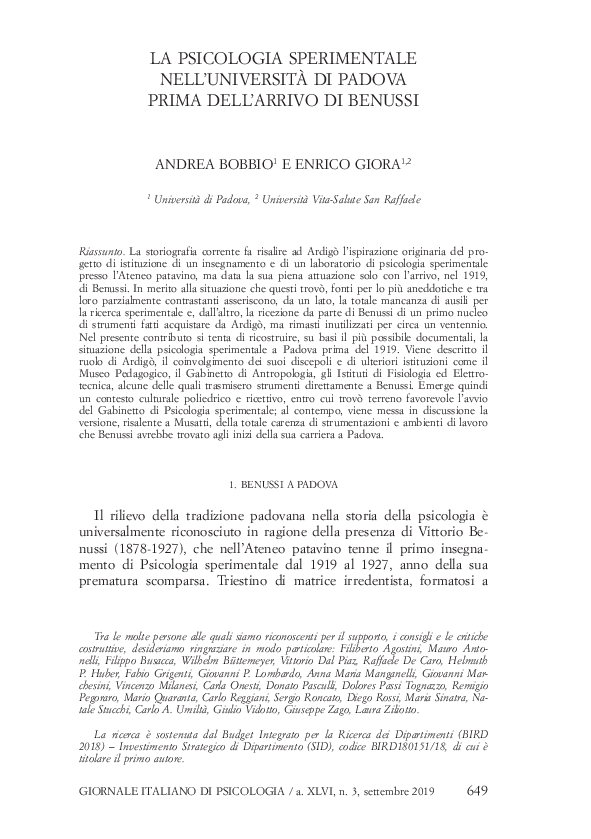