This article provides a critical overview of the current sociological debate on prefigurative politics by underlining its relevance for the study of progressive and emancipatory politics. Prefigurative politics is firstly introduced and contextualized from its initial use in the late Seventies until the more recent alter-globalization movement and Occupy. Prefigurative politics is described as being able to create, restore or defend collective spaces where it is possible to experiment not only with alternative practices of production and consumption, but, more holistically, with «alternative forms of life». The article continues with a discussion of «concrete» and «real» utopias in light of the recent contributions by prominent sociologists working on alternatives to capitalism such as Erik Olin Wright and Ana Cecilia Dinerstein. This part is followed by a brief review of the critiques posed to prefigurative politics, critiques that disregard it as ineffective and merely performative. The article´s final section includes a response to these critiques and affirms that we should move beyond a dualistic understanding of prefigurative politics, too often conceived as incompatible with conventional repertoires of political action. Prefigurative politics should rather be recognized as being ontologically and epistemologically unique, therefore representing a necessary component of any public sociology and political strategy aiming at being radical, emancipatory, and decolonial 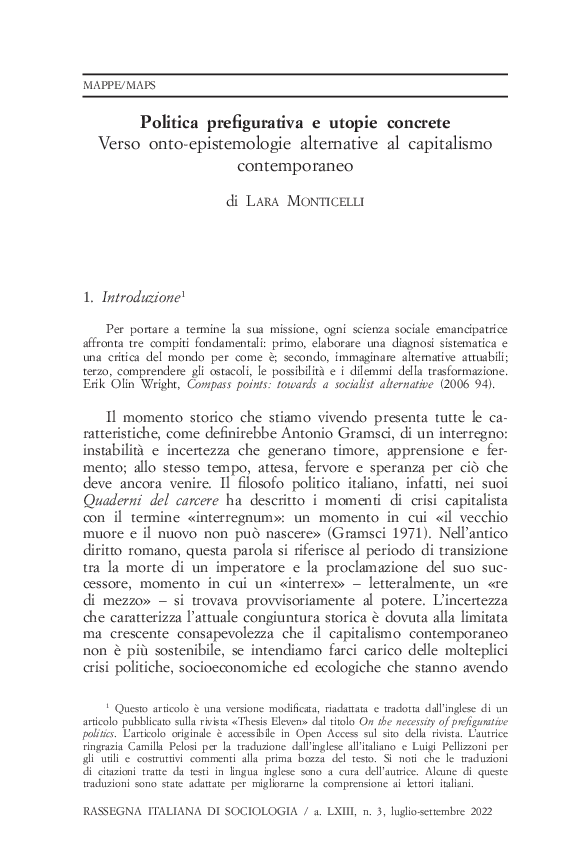