Living with and confronting diversity is becoming a daily condition of western societies. We are testimony of a quick diffusion of a greater sensitivity for individual and collective specificity, which is transformed in a central rhetorical tool for both the formulation of new demands of inclusion and for the claim of rights and privileges. The sociological discussion about difference was often totally absorbed by the debate about multiculturalism. But, this debate often remains narrowly limited either to normative issues - philosophical perspective, theory of justice - or to pragmatic issues - social policy, affirmative action. In both these perspective a specific sociological point of view is missed. They lack a specific interest to catch how difference is presented in actual empirical contests, how social actors use it in everyday relationships to make sense both of their actions and their realities. Also when it is used as an analytical tool, the concept of difference seems confuse, compelled into the dichotomy "essentialism" versus "radical social construction". In order to overcome this narrow dichotomy, the article proposes a more specific and sociological definition of difference. A definition able to highlight the character of situated resource for interaction, communication, identity and self-esteem difference is assuming in the contemporary societies. Stressing its aspects of situated resources allows an anti-essentialist but deeply rooted in everyday life description of contemporary forms of representation of and confrontation with difference. The concept of "everyday multiculturalism" is introduced to put in evidence situations and contests in which the constant presence of otherness needs an active work of "domestication" of reified differences produced on the macro level. A mundane work that takes place in situation where power, capability and resources are differently distributed, not shared in condition of equity and equality. 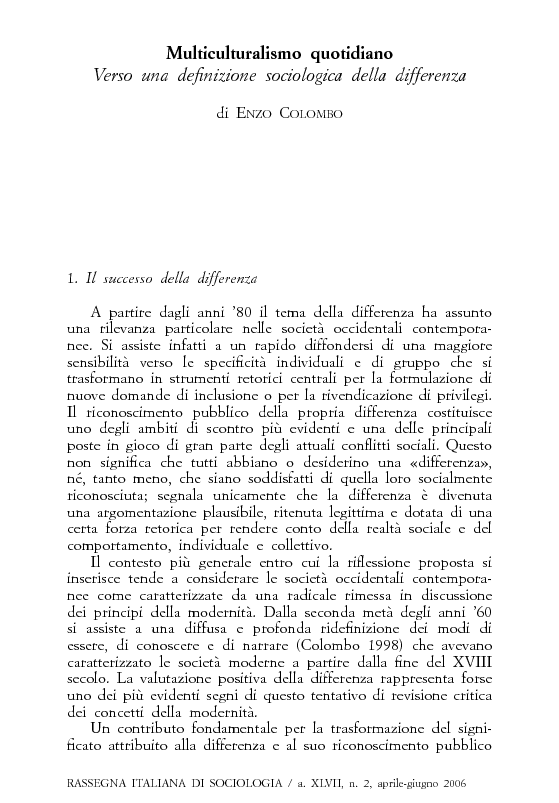