The study of the poverty is characterized by clear difficulties of methodological order, which concerns the definition of the phenomenon and its measurement. In Italy these difficulties are enhanced by the high differentiation, in social and economic terms, existing between the various regions and by the heterogeneity in the prices levels and living costs. For these reasons it appears very difficult to use standard parameters in order to estimate the effective level of well-being and poverty of the population in the specific contexts. Assuming the group of poor people as starting point of observation, poverty can be considered both from an internal point of view (endogenous perspective), which is the case of subjective poverty, and from an external point of view (exogenous perspective), which is the case of objective poverty. According to the first assumption, poverty is measured through the personal appraisals, opinions and feelings of poor people themselves, while using the second approach poverty is measured from external observers with reference to a fixed poverty line, through which population is dichotomised into two separated groups, poor and non-poor. In the present article we have been focusing on a combined observation of objective and subjective poverty. As it emerged from the analysis, between the two levels of poverty can be a remarkable distance, which has been investigated with simple statistical tools: in particular, some groups of population show a better perception than the objective condition, others a worst perception than the real condition. These differences can be partially attributed to the different living costs, but also the role played by the "response bias", which can distort the results, has been taken into account 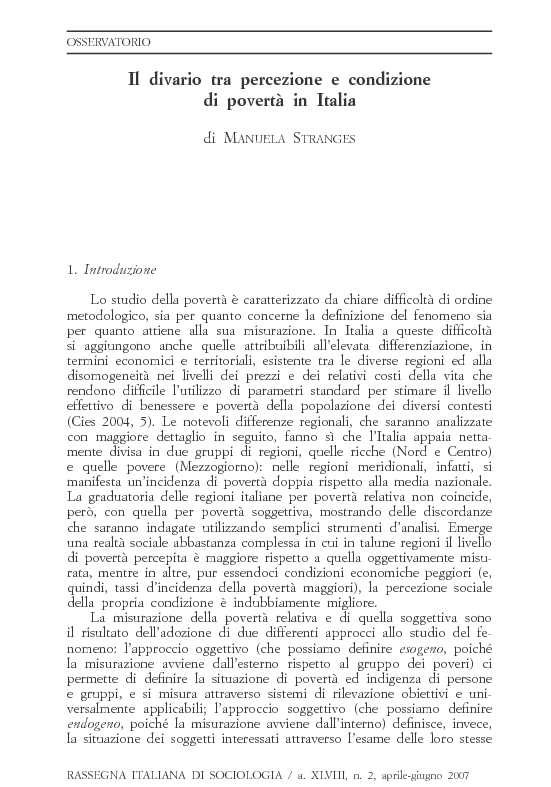