The article deals with the changes occurred in the rhetoric and the use of quantitative data in social policies as a result of the evolution of policy paradigms. During the second half of the Nineties, indeed, the concepts of effectiveness, efficiency and productiveness became central in the political debate. Their popularity increased significantly as a consequence of the success of the social investment paradigm and of the growing interest around evidence based practices. Moreover, such a transformation is rooted in a more broad change of perspective on the role of public intervention, embodied by the model of the New Public Management and by the political experience of the New Labour in Britain. The emphasis on effectiveness, and the need to determine «what works» provoked a process of restructuring of the informational basis of social policies, in which the use of quantitative techniques gained great momentum. Within this scenario, the article focuses on the complex relation between the concept of effectiveness and the practice of quantification. The main transformation in the use and the political role of data will be highlighted by recourse to institutional documents (mainly at the EU level), and through the analysis of practices such as counter-factual evaluation or the development of the so-called systematic reviews. Conclusive remarks will deal with the role information basis can play in legitimating power. It will be argued that a new model of legitimacy through expert knowledge has been established, which excludes academics, experts or technocrats by relying on «impersonal» and «de-localized» knowledge. Within this model, depoliticisation no longer consists in hiding the political character of decisions, but in limiting the range of the possible alternatives and the debate around them.. 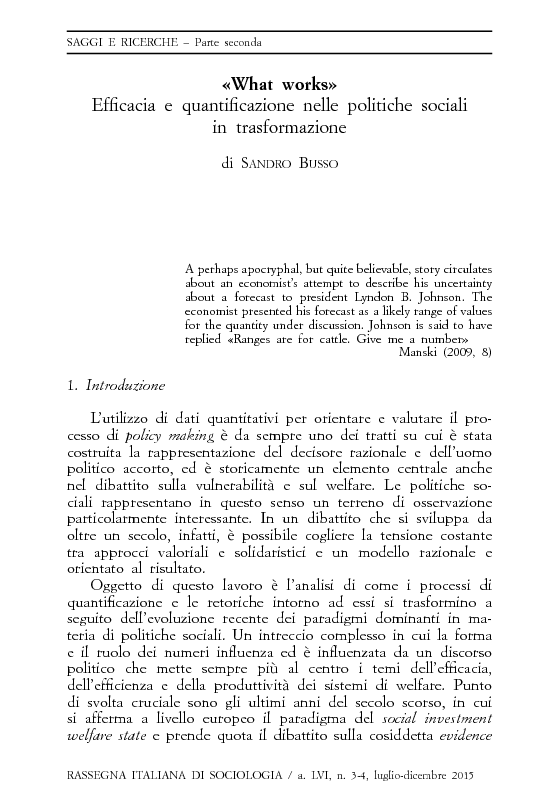