Using an innovative methodology, we investigate the relationship between local context and voter transitions in Umbria, the first Italian ‘red region’ recently conquered by the Lega. We estimate voter transitions from the general elections of 2018 to the European elections of 2019 and from the latter to the regional elections within twenty small areas that cover the entire region and apply multinomial models to investigate how these estimates of voter transitions are related to a set of variables that describe the local context. The set included both variables measuring the composition of the population by age, educational qualification, profession, etc., as well as other specific characteristics of the places. To reduce the number of the original explanatory variables which are, often, strongly correlated, three composite variables were detected by factor analysis, which are interpretable as urban factor, dynamism factor and unemployment factor; a dummy variable taking value 1 in areas with a strong left-wing tradition was added. In explaining the voter transitions, socio-economic factors were more important than the political tradition. The urban factor was the one with the greatest negative impact on outflows from the PD and the unemployment factor on those from the M5s. Transitions from PD to the Lega seem to increase with respect to urban factor scores up to a certain level and then decrease. Both the economic-demographic decline and the left-wing political tradition contributed to the defeat of PD. 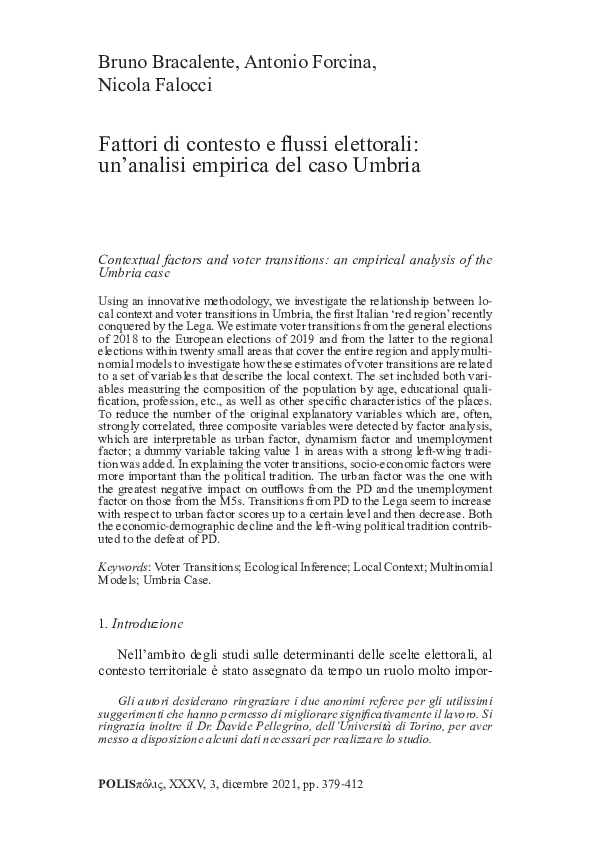