The aim of the paper is to analyse the relation between religiosity (as measured by church attendance) and trust. Research about this topic found very mixed evidence. Some of it uncovers a positive relation between religion and trust, ascribing it to religious teachings and/or to the repeated interactions fostered by the attendance of worship places. Other, based on a negative relation, ex¬plains it with reference to «bonding social capital». So far, the analysis on this topic has been carried out with reference to the United States while we focus on Italy and the peculiarities of Italian Catholicism. Our analysis is based on AVQ, a complex dataset produced by ISTAT (Italian National Institute of Statistics) that allowed us to draw a distinction between two types of interpersonal trust (thin and thick) and to test the differential effect of individual religiosity. As a result, we can reject the hypothesis of a negative impact of church attendance on trust: although weak, the relation between church attendance and trust appears to be positive. What emerges from the analysis are the peculiarities of the two extreme categories («super-attending» people, with regard to thin trust, and «never-attending» people, with regard to thick trust) rather than a fully positive relationship. Religion is no longer a divisive and therefore discriminating choice, as it had been in the past, but the peculiarities of these two groups deserve further studies. 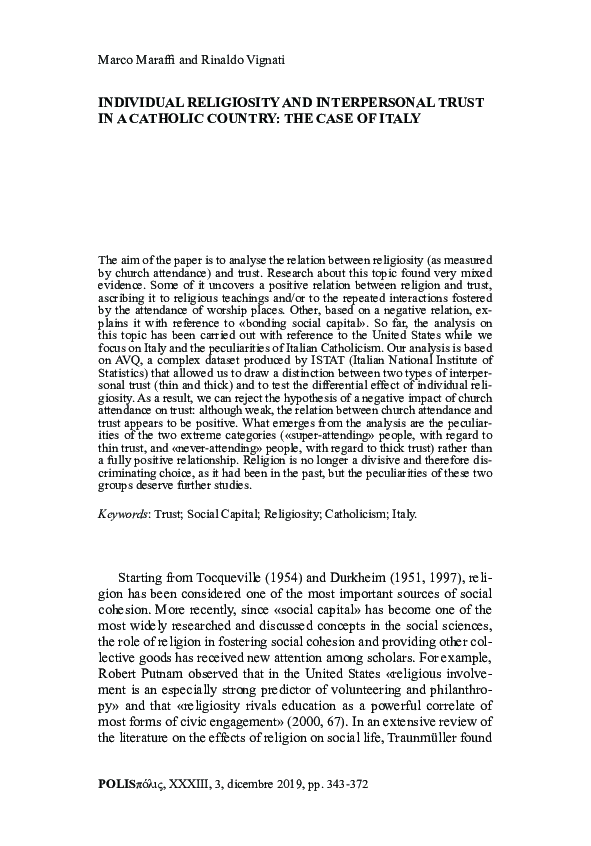