The manuscript focuses on the occupational consequences of the process of partial and targeted labour market deregulation undergone in Italy. We adopt a mid-term longitudinal perspective and we describe its association with both the overall employment rate and the diffusion and share of temporary contracts along the years between 1995 and 2016, a period characterized by relevant labour market modifications as a joint product of institutional reforms (mainly in terms of welfare and labour market de-regulations). In doing so, we explicitly allow for heterogeneity in the influence of these factors according to different business cycles. Indeed, we both provide a test for (long term) influence exerted by these structural and institutional changes in a highly segmented labour market and, prospectively, we shed light on the possible counter or pro-cyclical role played by macro labour market regulation and micro level exposure to non-standard employment. To tackle the research questions at stake we make use of eleven waves of SHIW (Bank of Italy) data and we run several specifications of random effects linear probability models. The overall pattern of the analysis reveals that both in terms of employment rate and in the share of permanent workers, macro level de-regulation policies and micro level density of temporary employment can exert less positive (or even adverse) influence on macro and micro labour market outcomes, with a significant pro-cyclical interplay with the economic conjuncture. 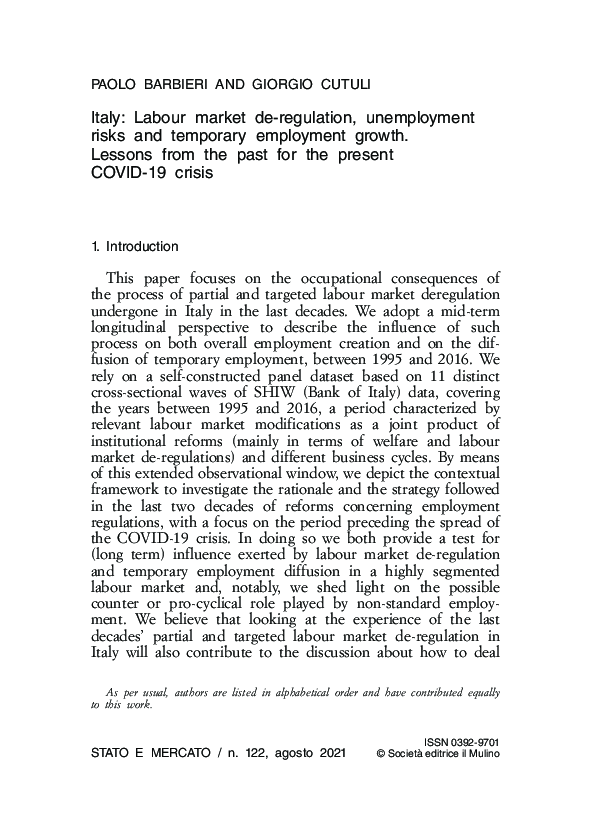