In 1992 the World Bank introduced the concept of good governance as part of its criteria for lending to developing countries. Governance referred here to the neoliberal reforms in the public sector - the new public management and marketization - that the Bank believed led to greater efficiency. In contrast, the Local Government and Whitehall Programmes of the British Economic and Social Research Council used governance to refer to a new pattern of relations between state and civil society; governance consists of networks, not markets. People construct various accounts of governance from within different narratives, where a narrative explains human actions in terms of the beliefs and desires of actors. If we take concepts such as narrative seriously, we will allow that the world is not given to people as pure perception; rather, different people perceive the world differently because they hold different theories. This insight, in turn, might lead us to a decentered analysis of governance at odds with those upheld by the economists of the World Bank and the political scientists of the Local Government and Whitehall Programmes. The article examines existing narratives of governance in relation to rational choice theory and institutionalism, thereby opening a space in which to push and pull these theories in an interpretative direction (section 1). Afterwards, the paper provides a decentered analysis of governance (section 2), indicating the distinctive answers it might give to questions about governance (section 3), and examining its implications for policy-making and democracy (section 4). 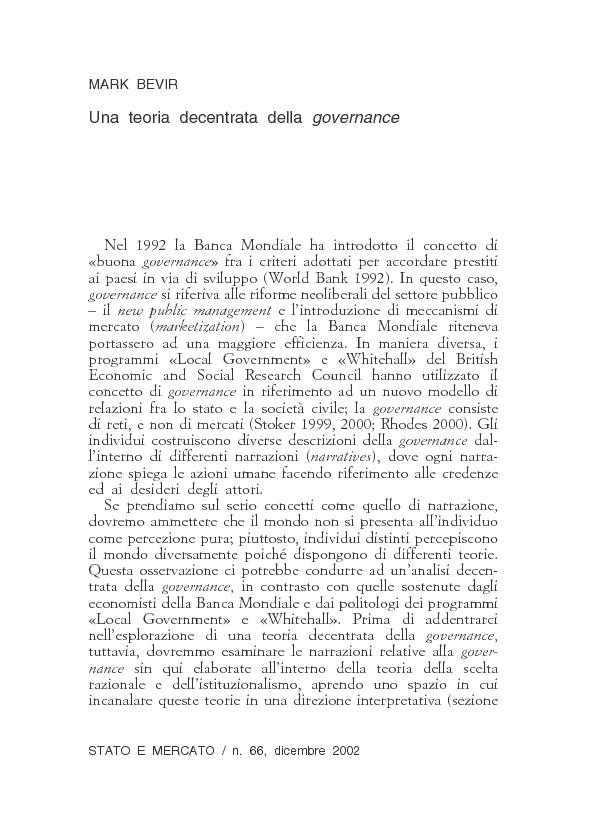