The integration and liberalization of telecommunications in Europe were the result of a combination of endogenous and exogenous forces. The shifting agendas of national governments and public operators and the pressure of socio-economic actors, on the one hand, and the impulse provided by supranational institutions, on the other, generated the new regime. Yet, the radical change of the international political economy (Ipe) of telecoms played a paramount role, by modifying the strategies and behavior of European actors. The case demonstrates the limits of theories of Eu behavior. First, the Ipe, often relegated to the role of "context", emerges as source and instrument of internal change. Second, the passage to supranational regulation and the subsequent development of common policies are not determined by a single set of actors and mechanisms, but by their interplay (coaction). Expansive-reinforcing mechanisms (spill over, "engrenage", legal ramification, adaptation and reliance on common norms) which tend to accelerate the process, and competition-negotiation ones (interstate bargaining, interest intermediation and bureaucratic competition) which tend to delay it, condition one another. Competition-negotiation mechanisms gain salience in the first phase, obstructing the initial passage, but expansive-reinforcing mechanisms counterbalance the others in the second phase, giving impulse to "policy" expansion. 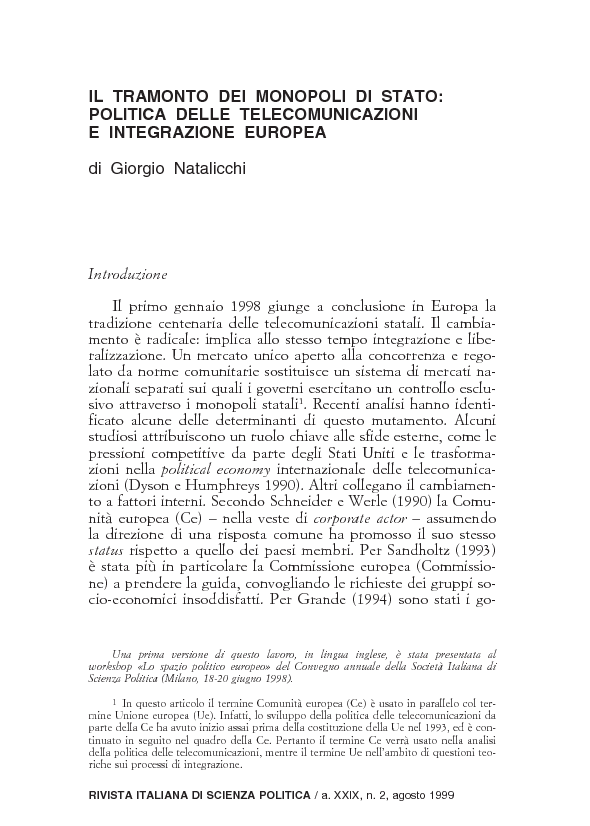