The most significant ramifications resulting from the first implementation of the direct election of the prime minister in Israel are a dramatic change in the competitive electoral orientation of the party system and a significant shift in the electoral strength of the parties. This article sets out to describe the consequences of the electoral reform - the creation of an institutionally-unique regime type - on the party system by focusing on two aspects: first, the electoral dynamics - i.e., the convergence toward the center in both the prime ministerial and the parliamentary elections; second, the election results - i.e., the decimation of the two main parties and the rise of sectarian parties. It is the contention of the author that the first aspect made the second one possible. That is, the centripetal trend on the dominant electoral dimension of foreign "policy", by not only the candidates for the directly-elected prime ministership but also by the parties in the concurrent parliamentary election, allowed the smaller parties to offer the voters extra dimensions on the parliamentary ballot concerning domestic issues. The loss of seats by the two main parties, and the dramatic increase in the representation of sectorial parties, thus exacerbated an already multidimensional party system with enhanced centrifugal pressures. 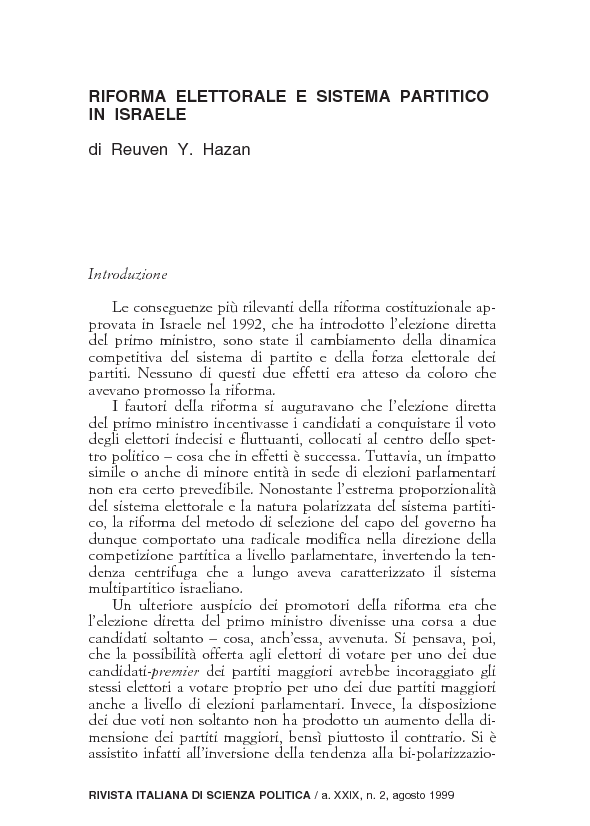