For at least a quarter of a century, sociologists, political scientists, and political analysts wondered if and how classical social variables - in the first place those related to socio-structural cleavages - which for decades had guided the analyses of political behavior and attitudes, could be capable of "explaining" the variance of electoral behavior today. Our empirical research consisted in building up an explanatory model for electoral choice in Italy, having - in three subsequent steps - social cleavages (class, religion and territory), socio-demographic variables (age, gender and education) and various political attitudes as independent variables, and applying such model over a rather long period of time. This, in order to see if and how the capability of this model - and of the three different sets of variables - of explaining electoral behavior has changed over time. We have applied such a model to the national elections of 1968, 1972, 1983, 2001 and 2006, using logistic regressions with vote dichotomized into Center-left vs. Center-right parties. The results show clearly the existence of a rather true gap between the elections of 1968, 1972, 1983 and the election of 2001 and 2006: the ability of the model to correctly predict voting outcome and the general fitting of the model sharply declined between these two groups of elections. In 2001 and in 2006 the variables that we can define "socio-structural" for their link to social cleavages or to basic socio-demographic characteristics, seem to be almost completely irrelevant for the purpose of understanding-explain electoral behavior in Italy. We do not know how much of the different explanatory ability within the very same model for the years '70-'80, and at present, is due to the transformation of the political system (also as a consequence of the new electoral legislation), or if caused by a real process that makes collective identity to grow significantly weaker thus favoring the individualization of politics and electoral behavior. Whichever be the answer to this question, the fact is that today, sociological variables seem to be unable to explain voting behavior successfully in Italy. 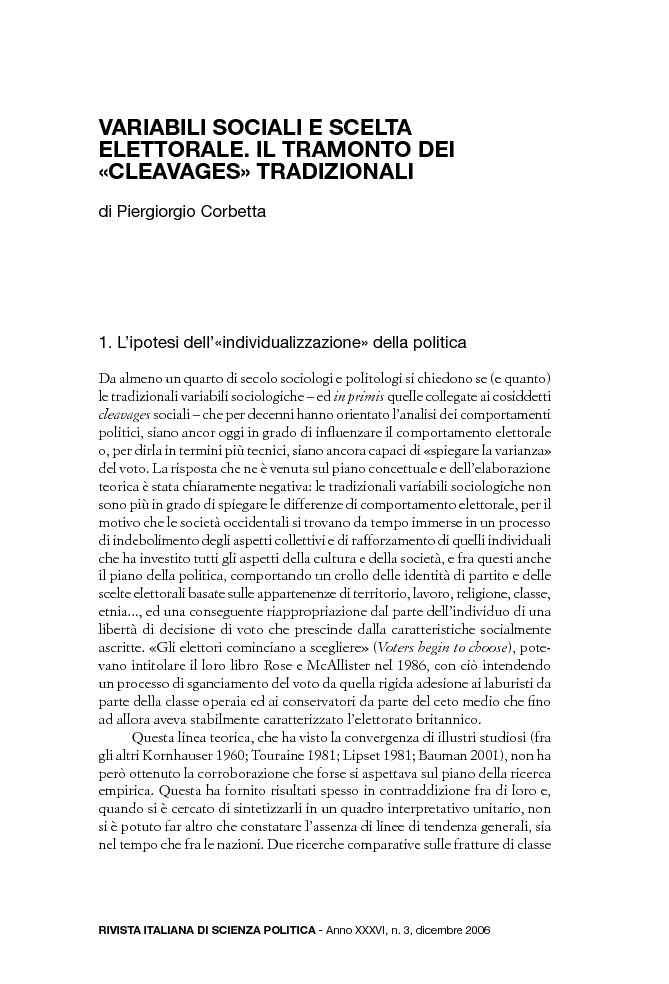