This paper explores the qualitative dynamics of the economy in the Keynesian short run, following the authoritative formalizations of Keynes' General Theory but including a hypothesis of adaptive price expectations of firms. We show the existence, via Hopf bifurcations, of a stable cyclical (and possibly chaotic) behaviour of the economy around the equilibrium, with an interesting economic interpretation of the qualitative dynamics: the existence of "thrifty" wage earners or of a production technology tending to linearity may favour cyclical paths (and ultimately chaos and exploding spirals). This result provides a further endogenous explanation of business cycles, namely the minor business cycle, which can be entirely ascribed to the short run analysis of Keynes' General Theory. Furthermore, it allows a clear-cut statement on the role played by economic policy in influencing economic stability. A further relevant theoretical finding is that the real wage reacts in either direction to fluctuations in effective demand during the cycle, although "the production exhibits impeccable diminishing returns to labor in the short run", reconciling both neoclassical and Keynesian views on the role of the real wage (in the sense of the pioneering paper by Solow and Stiglitz 1968). 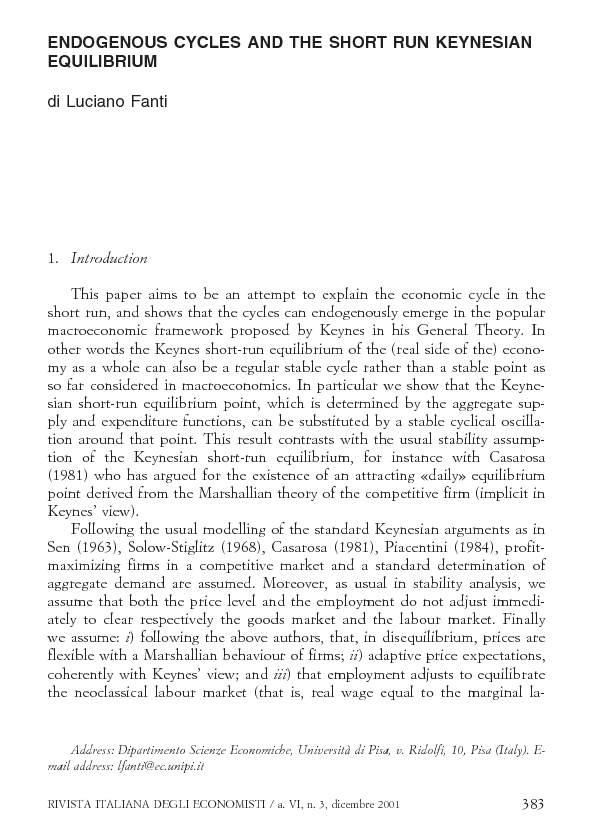