The Aspiration to a Dialogue between Mathematicians and Scholars of the Scientific and Humanistic Disciplines in the Thoughts of Ennio De Giorgi (J.E.L. A10, A11, A12). The article aims to focus the attention of economists on the Basic Theory of the fundamentals of Mathematics of Ennio De Giorgi, mathematician among the greatest of the 1900s, who passed away in 1996. After a brief introduction, the second paragraph deals with the theoretical horizon to which the Basic Theory usefully refers, to be highlighted later in its proper perspective. Paragraph three presents the Basic Theory in general, with the special aim to clarify the main intentions pursued along with it: that of reaching a Theory of to the fundamentals of mathematics which is "open" and which makes it possible to overcome the "reductionistic" point of view; that of favouring a dialogue between mathematicians and scholars from other disciplines, both humanistic and scientific. Paragraph four attempts to highlight the interweaving between the Basic Theory, the sources of ideal inspiration, and the positions at once ethical and epistemological at which De Giorgi arrived: the inevitability of transcendence; the search for dialogue and thus for the interdisciplinary meeting as an expression of love for Wisdom, from which truth has its origin, and the sense of every form of knowledge. The article reconsiders these components of De Giorgi's thought in light of the long and vigorous research of Gadamer, the great philosopher who developed Heidegger's thought in an absolutely original and fertile way. It is argued that, for De Giorgi as for Gadamer, the truth of being is in transcendence. This truth, then, is beyond metaphysics; it is the truth of "being here" in an intrinsically temporal and historical sense and at the same time, of the responsibility facing the unique case: in other words, it is the truth of the unveiling of the moral conscience, living, and of the ideal aspects as a source of ethical inspiration. The possibility of communicating between different worlds is a consequence of the priority attributed to the ethical experience in the realm of the unifying horizon which consists in the platonic "idea of good", which reveals and hides itself and allows only a glimpse of its structure: measure, harmony, truth. Observing Mathematics like De Giorgi, that is to say, not only as an instrument for exact analysis, but also as a source of emotions and ethical inspiration, the dialogue between mathematicians and scholars in human science does not seem even slightly incompatible, if we assume the sense of re-proposing idealness as a source of ethical inspiration. In the final part of the article, it is argued that, starting from the truth of historical determination of ends, constraints, and means, Political Economy may establish a relationship with Mathematics which is different and deeper compared to the previously consolidated one along the line of the relationship that Mathematics has established with all scientific disciplines. In other words, Political Economy may take on a special role, favouring a dialogue between mathematicians and scholars of humanistic disciplines, in which metaphysics, the theory and in general the episteme are re-proposed as rhetoric in the ethical dialogue. 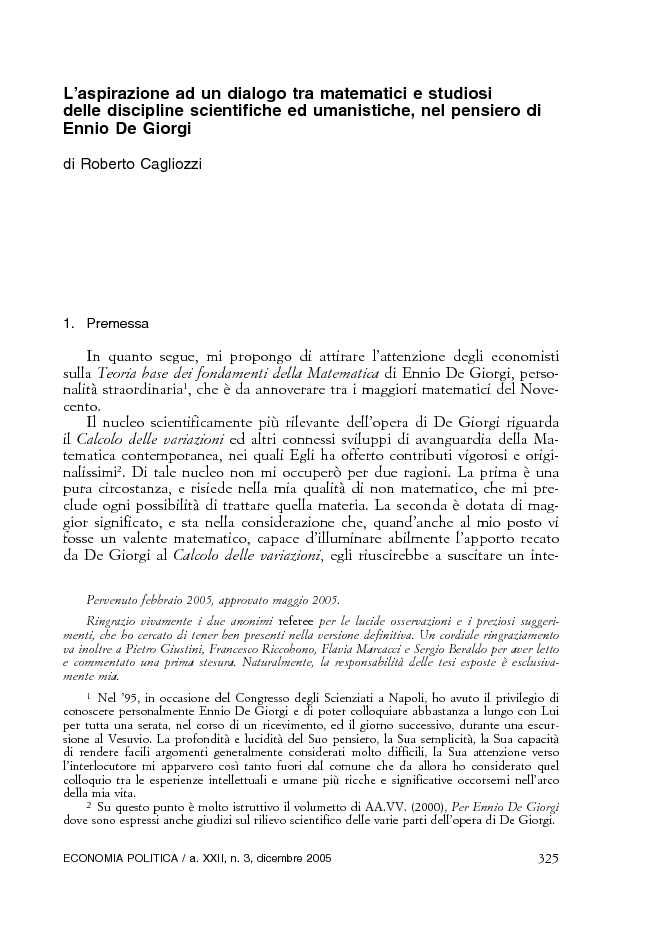