We consider the classic constitutive equation of equilibrium of the economy reduced to the linear relation between the income Y(t), the public expenditure G(t) and the interest rate R(t). We then introduce memory mechanisms in Y(t), G(t) and R(t) through the reactivity of investments to interest rate a(t). The memory is represented by means of a convolution with the memory function to be determined. In cases of practical interest it is found that the time needed to reach steady state depends on the relaxation time of the memory mechanism introduced. The effect of a sudden variation of the interest rate, when the public expenditure is kept constant, causes a sudden variation of the income Y(t), followed by a transient which may be asymptotically nil. It may be seen that the memory may act on Y(t) as a low (high) pass filter reducing (increasing) the fractal dimension of the system and therefore stabilizing (destabilizing) the system. From this study emerge important effects of the prime rate change when memory is present: 1) as all the phenomena with memory, also in economy, the effect would be irreversible, 2) to guide the economy with changes of the important parameters is essential to know the relaxation time of the memory of the parameters. However it would be misleading to believe that the knowledge of the memory be sufficient to guide the economy using the classic tools. In fact there are too many other factors influencing the economy whose effect is difficult to take into account. In this study we have only explored the important factor represented by the memory. The effect of the memory of the reactivity of investments to interest rate on tax M(t), available revenue W(t), consumption C(t) and investments I(t), when the public expenditure G is kept constant, are of the of the same kind as those on the income Y(t). A method is also suggested which allows to determine the memory formalism when this is of the type of fractional order derivative. 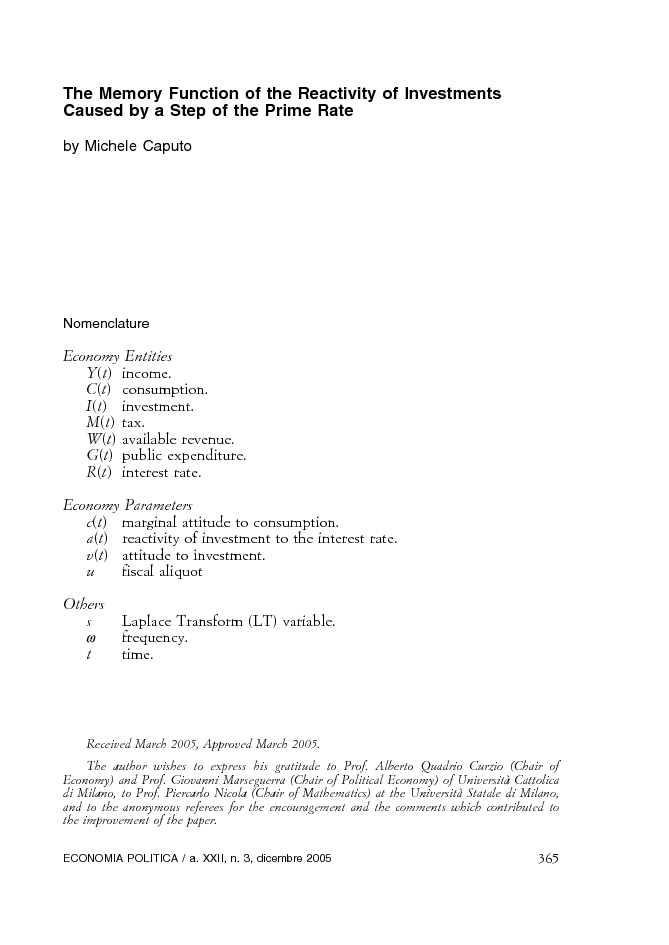