The aim of the paper is to critically review contributions on the role of innovation upon industrial dynamics and the evolution of sectors. Two theoretical and interpretative divides stream along the literature; on the one hand, there is the well known divide "technology push vs. demand pull". The technology push literature assumes that, being the set of possible human needs limitless, users cannot provide information for firms, which ultimately make their decision based upon technological opportunities and bottlenecks. Conversely, demand pull theories suggest that there is tendency of new technology to lag behind the revelation of human needs. On the other hand, both technology push and demand pull contributions are not monolithic, neither homogenous since a second divide intersects both streams of literature. Indeed there exists a flow of literature both coherent with mainstream economics and focused on the monetary incentives of firms to innovate. On the technology side, this is translated into the analysis of the impact of markets and institutions upon the rewards of innovation. On the demand side, this framework results in the analysis of the market size as the main pull mechanism. A second approach departs from mainstream economics, sacrifices the analytical tractability of the issues, and highlights the role of the knowledge embedded in the innovation processes. The focus is thus on the learning process within and between firms as necessary conditions to innovation. The demand side here is conceived as a flow of information from users and consumers to producers. The organization of the paper will mimic the historical structure of the literature. Specifically, it shows how these approaches emerged, the critiques they are confronted with and, eventually, their refinement. Finally, the paper discusses the recent attempts to overcome both divides in order to have an increasingly coherent theory of innovation and evolution of industries. 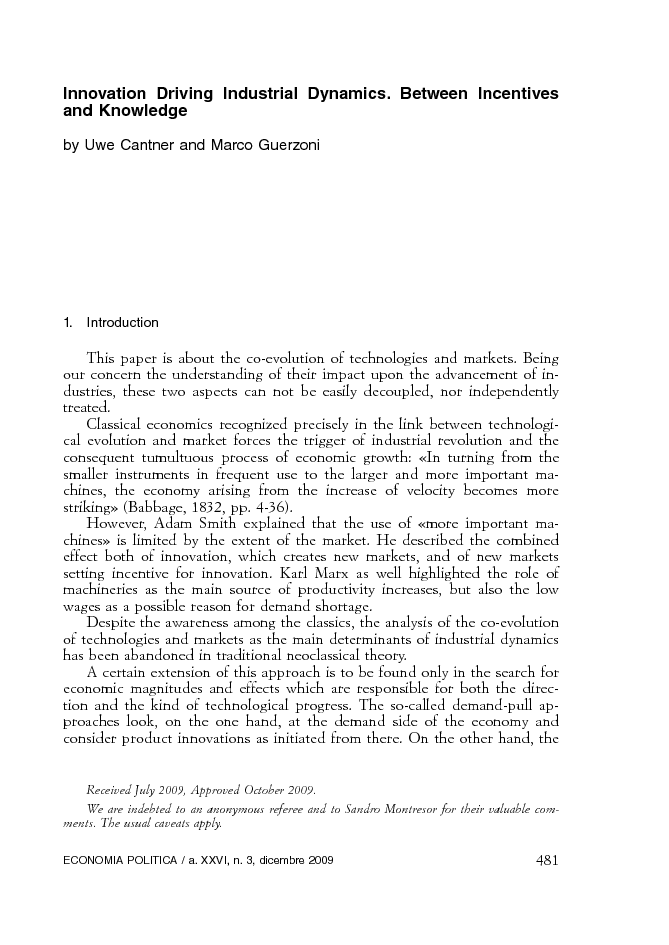