In our paper we explore the feasibility, in terms of the budget, of reducing the contribution rates to the pay-as-you-go pension system (in particular for newly-hired workers), while using the severance payment contributions to create a second fully-funded pension pillar able to provide supplementary coverage. We show that the cost to the budget of such a transition would be substantially reduced if the payroll tax reduction had positive effects on employment. The proposal can be criticized on at least two grounds: 1) it could have a redistributive effect in favor of employers; 2) if the transition has no effect on employment, it would increase public debt. In the response we argue that: 1) the redistributive effects of the payroll tax cut will depend on the overall conditions of the labor market (that is, on the elasticity of the demand for and the supply of labor) and on the way the payroll tax cut is financed; therefore, our proposal is in principle compatible with all (or zero) redistributive effects; 2) the payroll tax cut is in fact likely to increase the demand for and the supply of labor; otherwise "prima facie" the proposed reform would not have any macroeconomic effect. Against these potential limits, the proposal has two clear advantages: 1) a mixed system allows some risk diversification (demographic shocks, which affect the rate of return of a PAYG system, are scarcely correlated with the interest rate shocks to which a fully funded system is vulnerable) and it is less prone to financial imbalances; 2) a payroll tax reduction will reduce the amount of mandatory saving, thus unavoidably increasing (or not decreasing) consumer welfare. 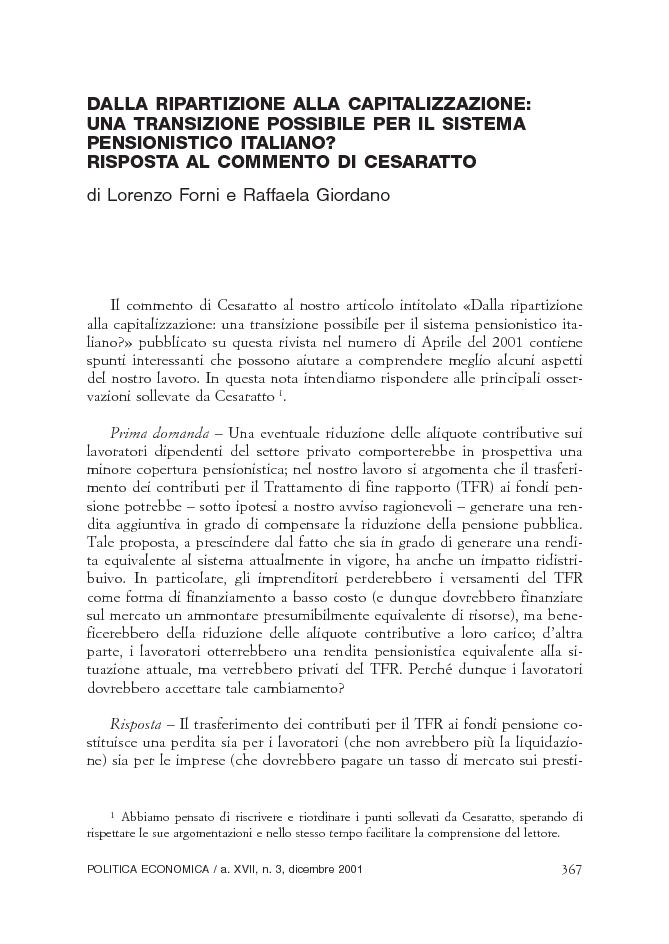