In 2003, the so-called Biagi Act attempted to deeply reform the Italian labour market institutions in two different ways: (i) to increase the number of contractual types for employees; (ii) to improve efficiency in the mechanisms for demand and supply matching.In this paper we shall appraise the first point, regarding the economic effects of both the enlargement of the contractual types for employees and the discouragement of the quasi-dependent (but formally self-employed) "co.co.co" employment contracts. A complete analysis of the effects on contracts generated by the new act will just be possible when a new medium run equilibrium will be reached. Thus, our assessment follows two different criteria. The first one is an economic theory approach: what can labour economics say about the working of the reformed institutions? The second criteria is a historical one: how can the reform be placed within the recent evolution of the Italian labour market? Following both the economic theory criteria and the historical one, we find out that the reform is seriously defective. The Biagi Act focuses just on the allocative task of labour contracts, while it underestimates the problems of its other tasks (i.e. to signal quality, to guarantee effort, to provide insurance and to distribute profit and wage shares). Moreover, the reform "leans against the wind" by imposing innovations to both firms and unions. On the contrary, the previous reforms worked on the same line of the experiences gathered during the collective bargaining, possibly improving them. We believe that this way of acting has contributed to the rise of a climate of political and social tensions. 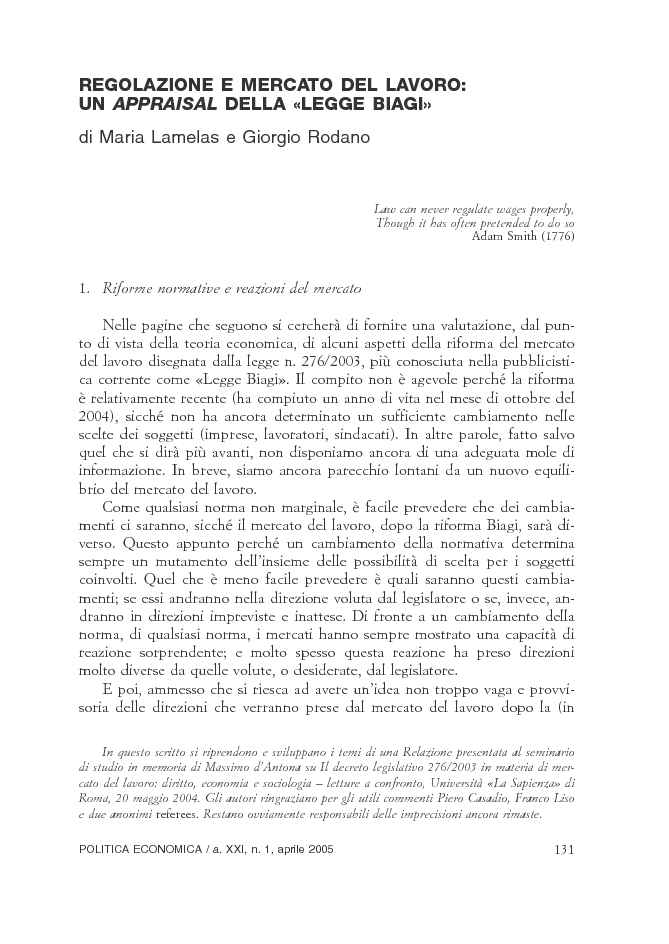