The paper compares the framework of firms taxation in the new proposed fiscal reform and in the reform implemented only four years ago. As far as incentive for firms to capitalize (embedded in Dual Income Tax, set up in the previous reform) is concerned, the Author claims that it is not overcome by the new reform, which aims at a more uniform fiscal treatment of firms (DIT poduces an array of tax rates). It reappears into both, the new tax regime for dividends (that disincentivates the distribution of profits) and the provisions aimed at penalising thin capitalization. Abolished the Dual Income Tax, it so reappears in a more asystematic and arbitrary way, still in an array of tax rates. If the purpose for change was fiscal neutrality, it could be achieved, either correcting the Dual Income Tax or giving ultimate coherence to the premises of the new proposed legislation. A discussion on the issue of neutrality is carried out. As far as the planned abolition of IRAP tax is concerned (a tax based on incidence of value that factors of production add at the factory level), the Author shows how such a tax melt together three separate and implicit fiscal designs relating to the treatment of profits, labour contributions and interests payments. Those designs could have been kept separate in the previous reform, at the benefit of transparency. The new reform may end up, without having full awareness of it - the Author claims - towards something near to the scission of IRAP according those lines more than towards a thorough suppression of the tax and its correspondent public receipts. In the background of envisaged changes in personal income taxation, the paper compares the likely impact of reform on both, firms subject to corporate tax and on firms taxed on personal income base. Planned provisions for treatment of corporate operations are also examined to arrive last at the over all conclusion that the ratio for a thorough change over of the fiscal system is far from emerging neatly and by all means does not resides in the intent to lower fiscal burden for firms. The latter is more likely to increase than decrease. 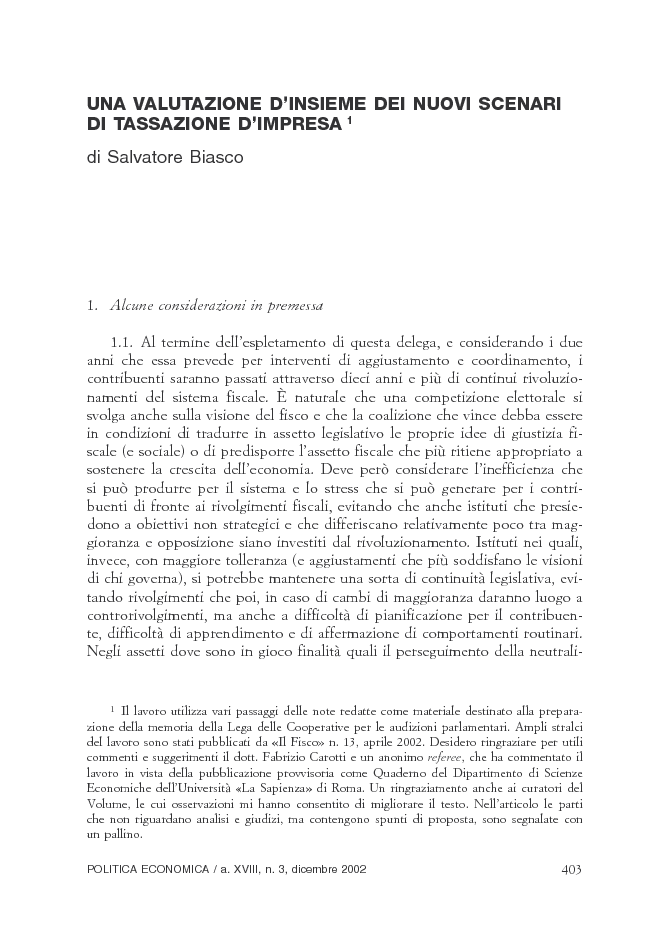