The aim of this work is contributing to the individuation of indicators of innovation which better describe different territorial types of technological change. To this end, I have first of all assessed the advantages and limitations of the indicators most commonly used (mainly expenditure in r&d and patents). I have then moved on to analysing the territorial diffusion of other forms of protection of intellectual property (pip): inventions, utility models, industrial designs and trade marks. In so doing, I obtained two interesting results. The first concerns the connection between level of development and prevalent type of pip. In the most developed regions in the Central-Northern area of the country we mostly find the patenting of inventions whose share increases over the total of the protection over time. Conversely, in the least developed Southern regions we mainly find forms of protection linked to the modification and adaptation of products and processes. The second result concerns the territorial ipp distribution. In the Central-Northern area there is a higher intensity of patents, while models and designs are more uniformly distributed across the national territory. Trademarks seem to be effected by the presence of large metropolitan areas, the availability of promotion services, advertising and marketing, to the effect that they are more territorially concentrated. In the final part I have put forward two new indicators: research output and incremental innovation. These indicators aim at providing a better distinction between upstream processes (research-invention) and downstream ones (modification-adaptation). Using few simple relations between these indicators and other magnitudes, we have explored the possibility of enriching the descriptive picture by attempting some classifications of the regions in homogeneous groups. Overall, these initial exercises confirm that it is possible to enrich the cognitive framework of the regional models of innovation, making it more complex and exhaustive, and thus better suited to inform industrial policies at the territorial level. 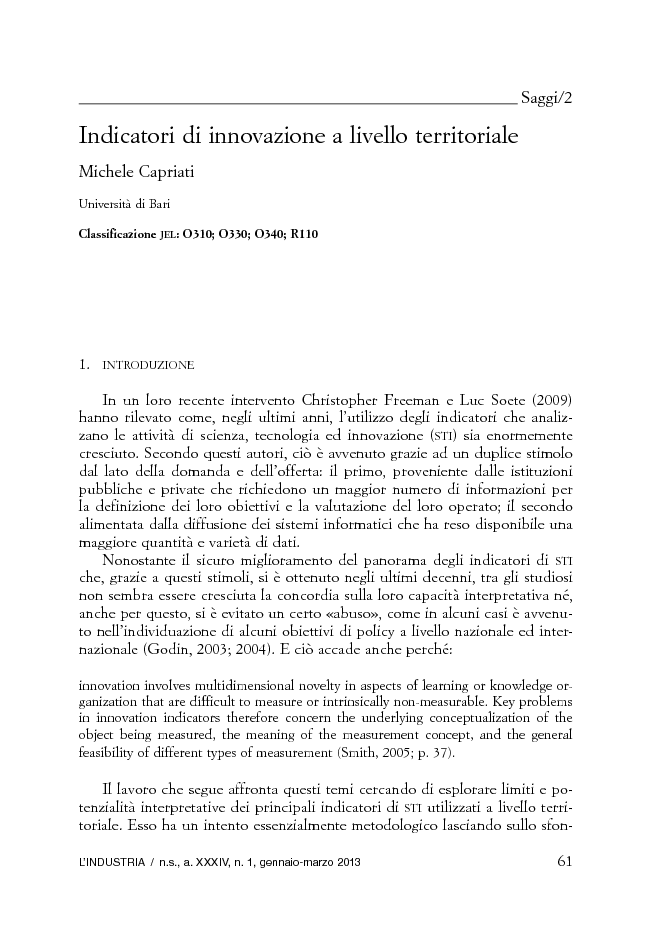