In 2019, when the pandemic crisis hit Italy, almost 15.4 million people were at risk of poverty and social exclusion, defined as people living in families who were experiencing at least one of the three conditions between low work intensity, risk of poverty or severe material deprivation. This article presents and discusses an analysis aimed at reconstructing, on the one hand, the impact of the pandemic on the labour market and on the risk of poverty, and on the other, the effects of income support measures, with particular reference to the guaranteed minimum income and the emergency measures adopted by governments come in succession in recent years. Within this framework, the analysis aims at rebuilding the relationship between supply and demand for social protection during the pandemic between the North, Centre and South of Italy. In the concluding remarks, particular attention is paid to the assessment of the critical issues emerged in the implementation of the guaranteed minimum income. The novelty of this tool marked a trend reversal compared to the years of linear cuts. With an unprecedented acceleration, a more than ten-year gap has been filled. In terms of fighting poverty, there is no doubt that the reform has made a substantial contribution to reducing poverty, especially severe poverty. However, critical issues remain, which risk weakening an instrument that has made an important contribution to facing risk situations, otherwise leading to dramatic effects in the midst of the pandemic 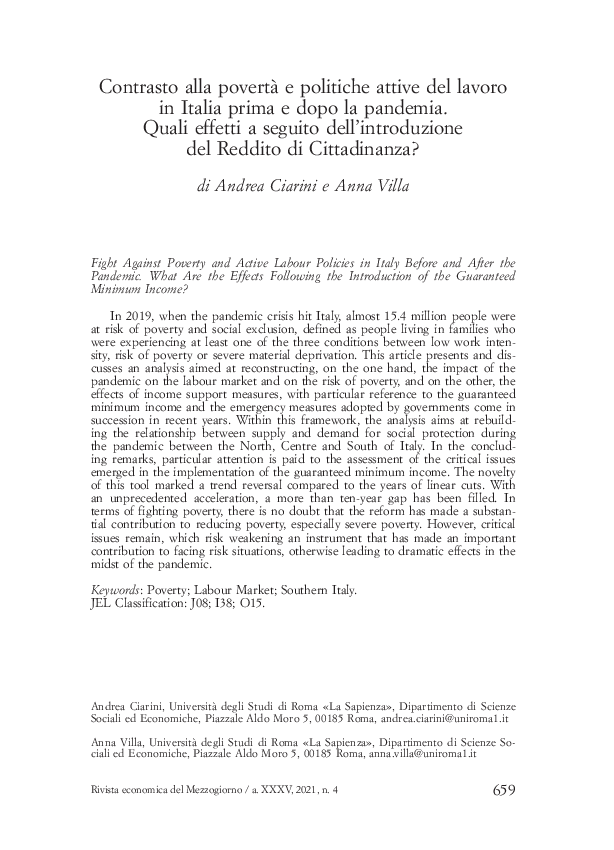