The legislative decree 56/2000 has been, until now, the only attempt of introducing fiscal federalism in our legal system. The aim of this paper is to give an account of issues relating to its implementation, thinking back to how financial flows had been calculated in the first two years of decree enforcement, in accordance with a reasonable interpretation of legislative text. We provide an evaluation of financial flows due to Regions in 2002, on the basis of data accessed by the High Study Commission for the Implementation of Fiscal Federalism in order to discharge its institutional duties. The analysis shows problems of misinterpretation, unclearness and incompleteness of the legislative text. The unavailability of proper data and the confusion about sources and their survey make more difficult the implementation which would require a coordinated policy among different Central and Regional Administrations involved. The results of the 2002 simulation show that almost all Southern Regions have had less resources than they would have been due if the decree 56/2000 had been carried out as suggested here. In any case, once running regularly, differences between the amount actually due to Regions and that assigned according to the legislative decrre 56/2000 continue to be substantial. 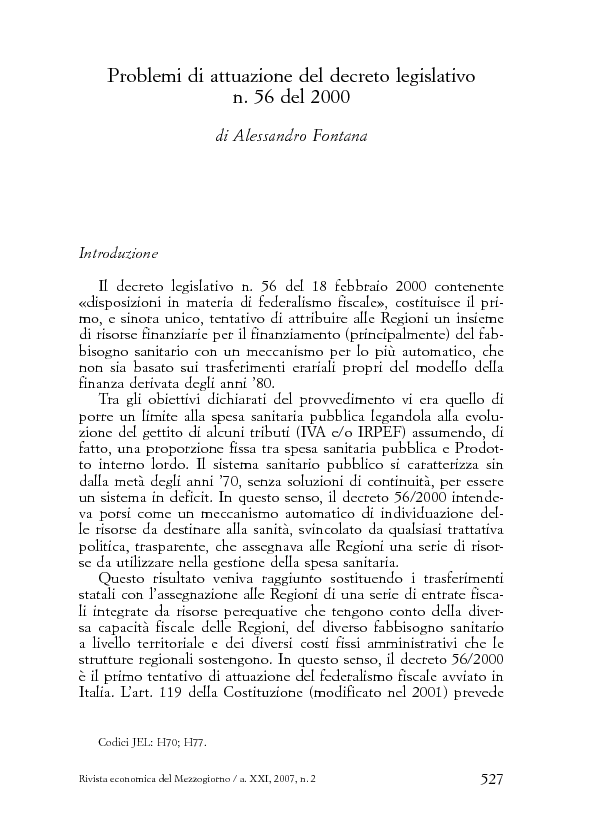