A recent reform (D.L. 35/05, now L. 80/05) has changed rules and access criteria to the investment incentives granted by L. 488/92, the main innovation being that the new system links the granting of the subsidy to the obtainment of a bank credit. As a result, the financial institution is charged to evaluate the economic and financial viability of the project. The first auctions of the reformed system have been conducted during 2006. The analysis of new applications allows a first evaluation of the effects of the reform and of its coherence with the policy targets of the new rules. The distribution of the applications of the new auctions is compared with the results of the previous auctions. However, being the set of the applications different from the one of the subsidized projects, a comprehensive evaluation of the reform has to include an analysis also of the latter. The new auctions include 4.167 applications, that account for 14.784 billions of Euros of investments. The auction related to the industrial sectors includes the 61% of the applications and the 76% of the investments; the auction related to tourism the 24% of the applications and the 20% of the investments; the auctions related to the trade sector the remaining 15% of the applications and the 20% of the investments. Comparing the new auctions with the previous ones we observe: an overall reduction in the number of applications, higher however for the small and medium-sized firms; the amount of investments remained similar to the previous auctions; an higher average investment per application; an higher share of extensions (defined as projects that increase the productive capacity of the firm). Energy sector has registered a share of the applications (and related investments) higher than in the past. Overall, the results of the reform are consistent with the expectations; however, they signal that for a large part of the industrial system in the Southern regions, characterized mainly by small-sized enterprises, is now more difficult to have access to the incentives allocated by L. 488/92, compared to the past experience. 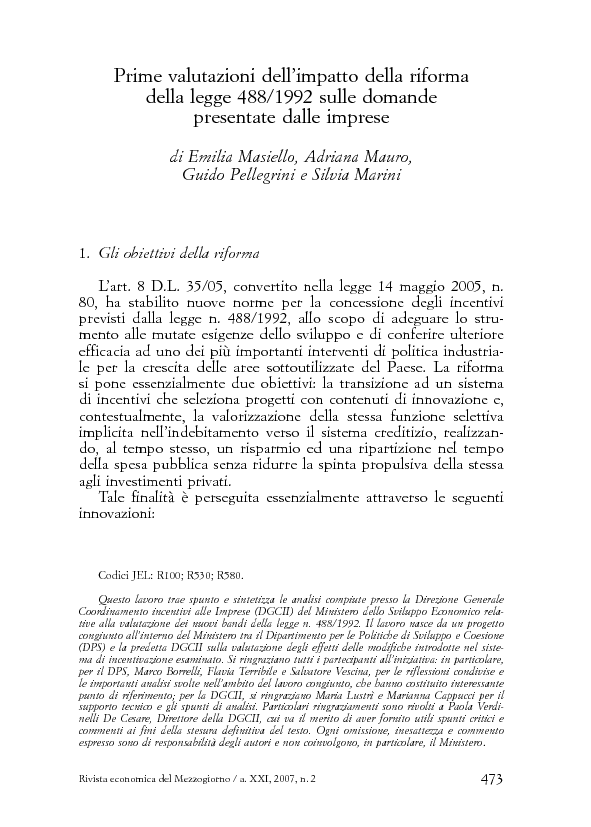