This paper aims at analyzing rate differentials between Sicily and other Italian regions. Official data on average rates imposed on customers, differentiated on the basis of geographic location, highlight a net gap between Sicily, and in general the regions of the Mezzogiorno, and central-northern regions. Therefore, we suggest a non-parametric analysis of rate differentials between Sicily and the rest of the country, which shows how this gap is shortened compared to some Centre-North regions, whereas it is clearer with reference to other Southern areas. Data show that, on average, there aren't substantial differentials between Sicily and Centre-North regions, whereas, as regards other adjoining areas, they exist. Such phenomenon could be interpreted considering the different routes followed by institutions in various regions. Sicily, a region under special statutes, has seen a growth of banking system definitely more marked than in other regions, leading to a growth of competitiveness among operators. This has probably caused a reduction of profit margins, nonetheless it could have led to more favourable access to bank loans, moreover as a consequence of a more careful management of borrowers, following the reorganization of system. As a result, it is possible to notice that Sicily records results better than those of the other regions of the Mezzogiorno, in line with the results of most part of the country, except for some regions that record systematically moderate rates. 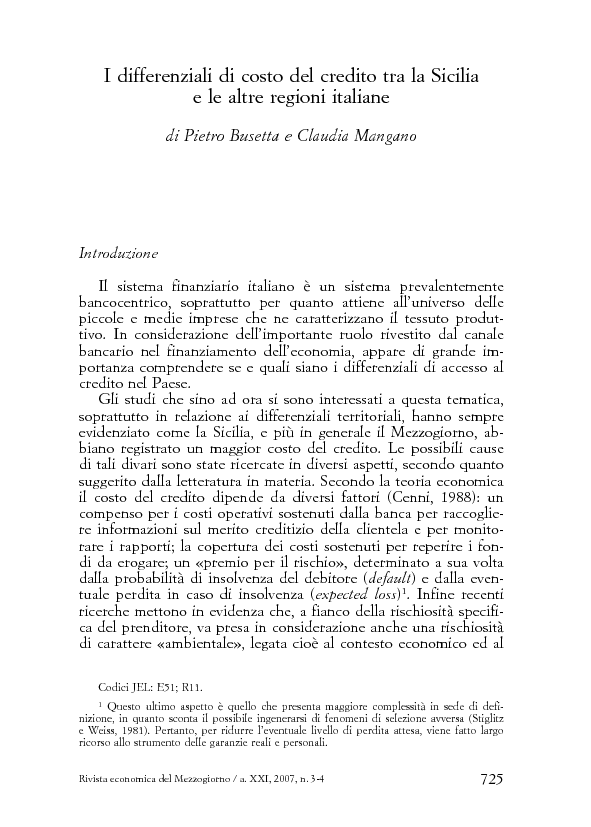