2008 Finance Act provides for the introduction of a tax credit in favour of those employers increasing the number of subordinate workers having a permanent contract, its implementation being restricted only to the "disadvantaged" areas of the Mezzogiorno. The Decree of the Minister for Economic and Financial Affairs, of March 12th, 2008, has enacted implementing provisions for regulating the procedures for accessing and benefiting from this concession. It is to be hoped that such a concession, provided for recruitment made from January 1st to December 31st 2008, will be "extended" also after 2008 recruitment, as economic improvement of Southern productive structure can be achieved by more long-lasting measures. Tax credit, monthly amounting to 333 euros for each worker who can be facilitated, accrues with reference to each month, from the month in which it is surveyed an increase of the employment basis through December 31st 2010; in case of female workers included in the Community definition of "disadvantaged worker", tax credit concession rises to 416 euros, on a monthly basis as well. The maximum amount of benefit due to each worker is of about 12,000 euros in all for "ordinary" employment, while it totals about 15,000 euros for "female" employment. In this study, we estimate the effects of such a measure in terms of "new jobs" created - 50,000 units, if we assume to employ all "ordinary" workers, 40,000 units, in case we employ all "disadvantaged" female workers. Therefore, on the whole, a full implementation of this concession could lead to an increase of the employment basis in the Mezzogiorno, varying between 40,000 and 50,000 units. 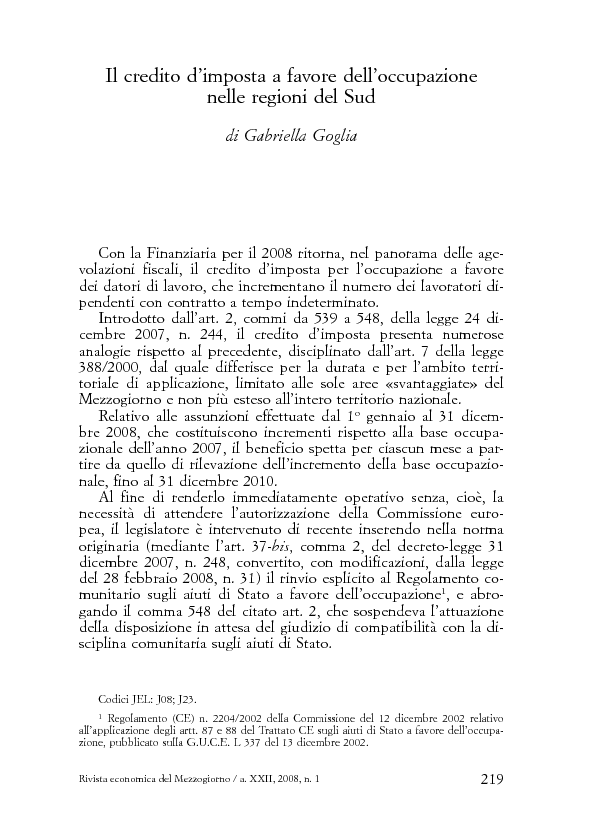