This paper focuses on income levels, inequalities and risks of poverty and social exclusion of the households living in Southern Italy, with reference to the european and national framework. The comparison highlights a "Southern gap" as regards both income levels and income distribution between the South and the Centre-North of Italy, as well as within the Southern region itself. Such a disparity is largely due to different employment opportunities (even between individuals with the same educational attainment) and different family structures. In fact, Southern Italy has an higher proportion of households supported by just one earner and by a single source of income. Furthermore, the number of dependants - such as children, unemployed and elderly people - per household is relatively higher. The vulnerability of Southern households is also measured, in paragraph 2, by the "at-risk-of-poverty rate", one of the European Union core indicators. It counts how many individuals live in households having a such low level of income (less than 60% of the national median) that they're most likely to be poor - or at high risk of eventually becoming poor. Furthermore, the risk of social exclusion has been evaluated by a set of non-monetary indicators on living conditions, related to the consequences of the lack of personal resources (material, social, relational deprivation). 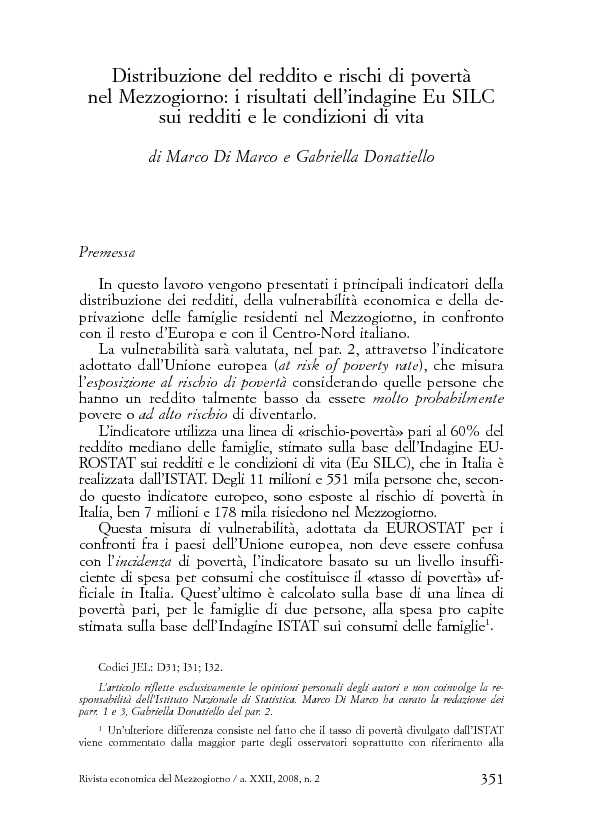