Trends of female employment and unemployment in the Mezzogiorno and in the Centre-North of Italy, during the period 1981-2006, highlight how female employment gap between these two Italy's areas, already existing before 1981, still remains persistent, although great changes have occurred - such as, for instance, women's attainment of a higher educational level, the development of job flexibility and, consequently, the increase of "atypical" workers. The situation in the Mezzogiorno appears more than ever dramatic, showing a female employment rate of 31,1% in 2006, definitely below the corresponding value in the Centre-North (54,9%), and lower than all EU-27 countries. As to female unemployment rate in the Mezzogiorno, it is equal to 16,5% in 2006, almost triple the rate (6,0%) of the Centre-North, and the highest among all EU member states. Taking into account such a current difficult social and economic situation in the Mezzogiorno, we can consider at least three reasons which are at the basis of this gap that affects women in the labour market: a) a structural lag of this area; b) a greater shortage of social services, fit to reconcile woman's job with her family life; c) non-existent meritocracy as well as equal opportunities conditions, both at the beginning of woman's placement in labour market, and during her job career. 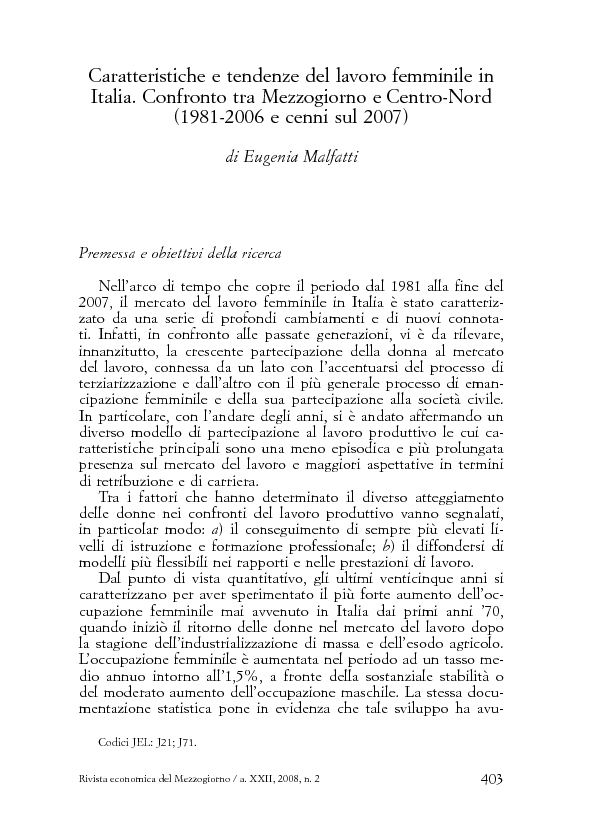