The central issue of this paper is the convergence process of Italy and, within it, of southern regions towards higher levels of education, in line with the main European Countries. When Italy was unified, Italian adult population had studied on average less than one year, against four-five years as to France and Germany. Regional gaps were considerable, higher than those concerning income and life expectation. In 1951, 90% of Italian population had a good level of literacy, whereas in the South of Italy the share had increased to about 75%. During the economic boom period, the convergence process of southern regions with respect to education levels absolutely accelerated and then slowed down in the last twenty years of the past century. In these years the importance of an articulate policy for the South of Italy surfaced, shifting from public works planning to business support and human capital enhancement. This paper accounts for the FORMEZ experience in the field of training, highlighting its ability to involve and to steer other public and private institutions towards the aim of selecting and training the new establishment. Finally, this paper analyses the most recent years, stressing how, in the last decade, the South of Italy has succeeded in bridging the gaps in education levels with the rest of the Country, taking a great step forward in secondary and tertiary schooling rates. The substantial disappearance of quantitative gaps implies, on the other hand, some qualitative problems. The school drop-out rate, almost zero at compulsory school level, is still quite relevant in secondary school - concentrating in the first years of course - is more widespread among males and in large families and is inversely correlated to parents' schooling and socio-occupational conditions. Drop-out rates and attendance irregularities are higher in the South of Italy and in the islands. International and national surveys on learning levels highlight negative gaps in the South compared to the Centre-North. Centre-North universities' attractiveness remains high, though the spread of university campuses in the last years. In other words, this paper stresses the inevitable mixing between education and social and economic development and how the stopping of the economic convergence process influences both human capital development and transition processes from school to labour. 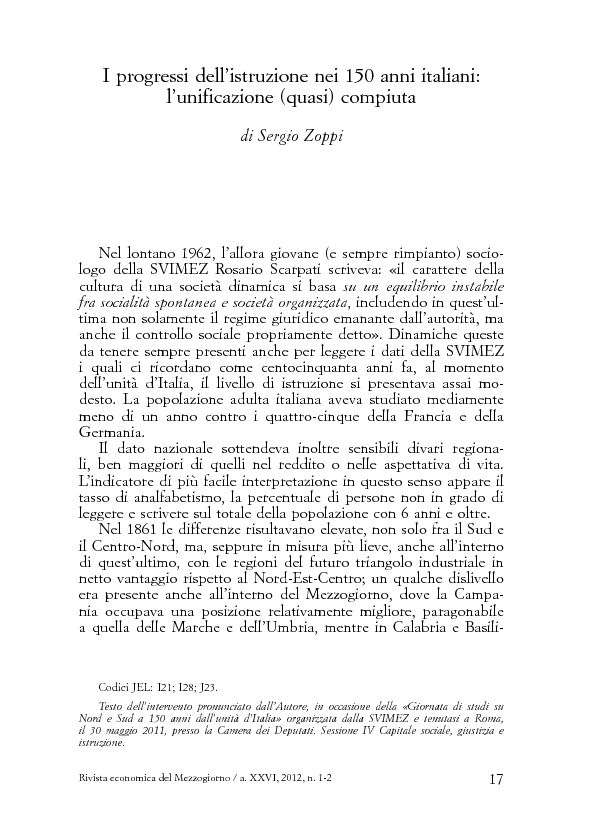