The analysis on the origins of the Southern gap, even taking into account significantly different opinions on its causes, has allowed to explain that the «Southern question», i.e. the chronic inequality in the development of Italy's two halves, became systematic after the Unification and during the industrial development of the country. Southern regions' gap was due not only to their general inferiority compared to the rest of Italy, but also to the structural gap between Northern and Southern Italy, which became wider as the country got up-to-date from a productive point of view, experiencing a dual mode of development. However, during a century and a half, Southern Italy's society and economy have undergone clear transformations. These changes were not backed by an evolution of Southern Italy's situation compared to the progress made by the Central-North of Italy. The history of united Italy featured a divergence between these two macro-areas, which got closer and experienced an effective reduction of their gap only during the golden age. The more recent events have brought back Southern Italy, deprived of extraordinary interventions as well, to its inequality gap, moving it away from the aim of convergence. Therefore, the Cassa per il Mezzogiorno has been the main tool for Southern Italy's development, especially when taking into consideration the whole range of its activities, operating effectively during the years of the «economic miracle». With the end of the extraordinary interventions, the «Southern question», until then tackled as an important, nationwide issue, was replaced by a fragmented view, without strategic ideas for Southern Italy. During the last years, a new obstacle emerged in the form of a «Northern question», arisen from the need for a revival of economic initiative by productive categories in Northern Italy. Such a move triggered a shift to new policies, whose outcomes could not be compared with the more productive period of the Cassa and brought forcefully the Italian economic dualism to the fore again. 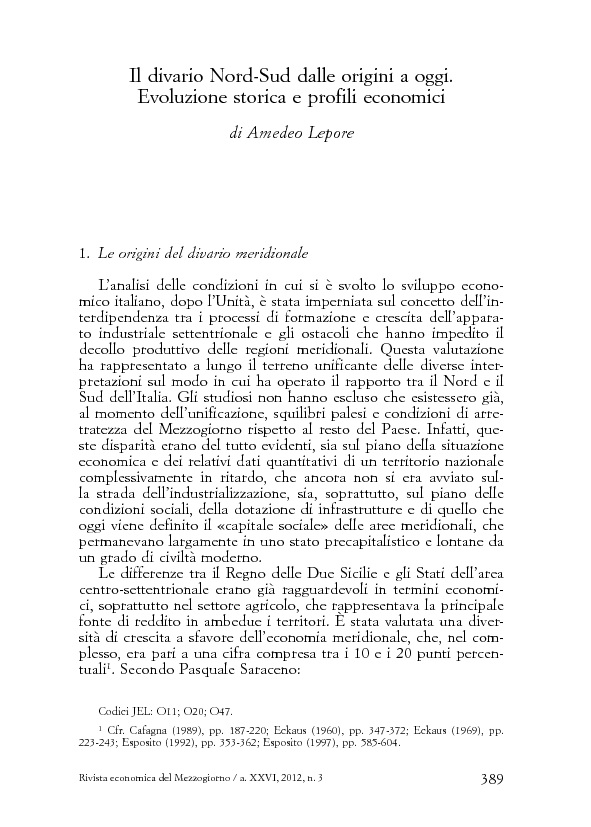