This paper aims at reviewing, through the analyses carried out by foreign scholars, the role of Italy as a natural laboratory for the building of theoretical models able to explain the features of dualistic development. In particular, the economic theories on development, arisen after World War II, began with the general view of the existence of developed economies distinct from underdeveloped economies, thereby excluding, in macroareas, the consideration of systems characterized by developed, and not, sub-systems. In this sense, the Italian economy has represented a special exception, especially after the explosive economic growth of the Fifties of the last century. Firstly, this paper carries out a brief reconstruction of the key stages that outlined Italian industrial development, then goes on with the analysis of interpretative models proposed by economists after the war. In doing so, we will try to support the thesis of an «hegemonic» model according to which all the academic debate was built. In the last part we will observe how, with respect to a gap left by economists in the analysis of Italy laboratory in the late 60s, contributions from political science have developed, which to some extent led to the reversal of the point of view of this phenomenon and the emergence of new intangible factors for understanding the different paths of development between North and South. We conclude that the Italian dualism is no longer a laboratory for foreign analysts because - in our opinion - on the one hand the geographical reference of compared areas has changed as a result of community policies for regional rebalance and, on the other, localisms have developed in Italy, each claiming its own question. 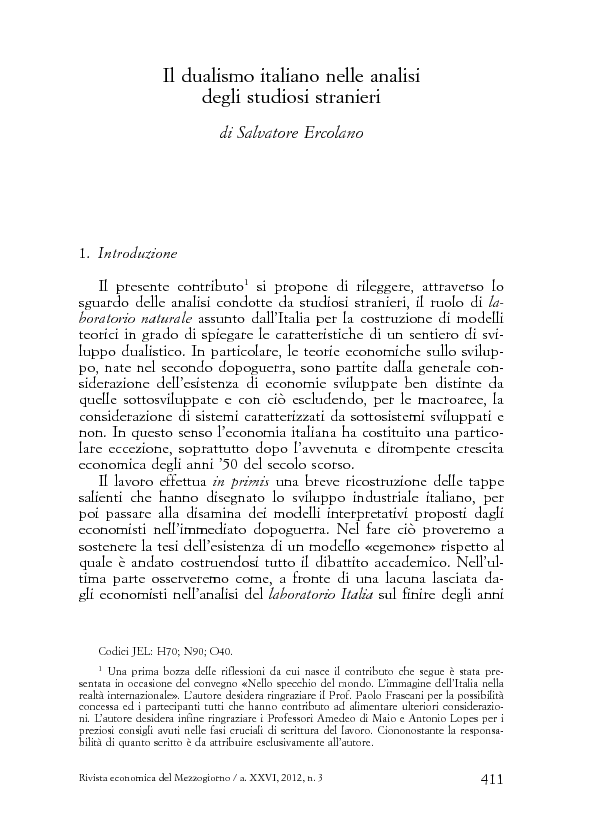