Italy's labour market is characterized by a considerable difference between Southern and Central-Northern Italy, often leading to set these two markets as separate in their functioning and only linked by the migration flow moving from Southern Italy to Central-Northern Italy. Such a functioning dualism can be further emphasized by the Okun's law, that is the empirical relation connecting the variations of unemployment rate to the variations of real GDP's growth rate. The first aim of this analysis is to verify if the Okun's law is still valid in Italy for the period considered and if there are any differences, as to this law validity, between the two sub-national markets - the Southern and the Central-Northern one. Secondly, the aim is to assess if there exist alternative indicators of market labour, understanding more effectively the relation investigated by Okun. As a further innovation aspect, we want to propose a reading of the structural differences between the Central-North and the South through an indicator which highlight the differences in terms of quantity and type of jobs created in these two areas as well as may provide a useful key to the reading of performance and structure differences of such two areas. From a methodological point of view, this survey will be carried out through a panel analysis using the Least Square Dummy Variables (LSDV) estimator, where spatial dummies are employed to estimate separately Central-North and South values. The data used are annual and concern Italian regions for the period between 1993 and 2004. 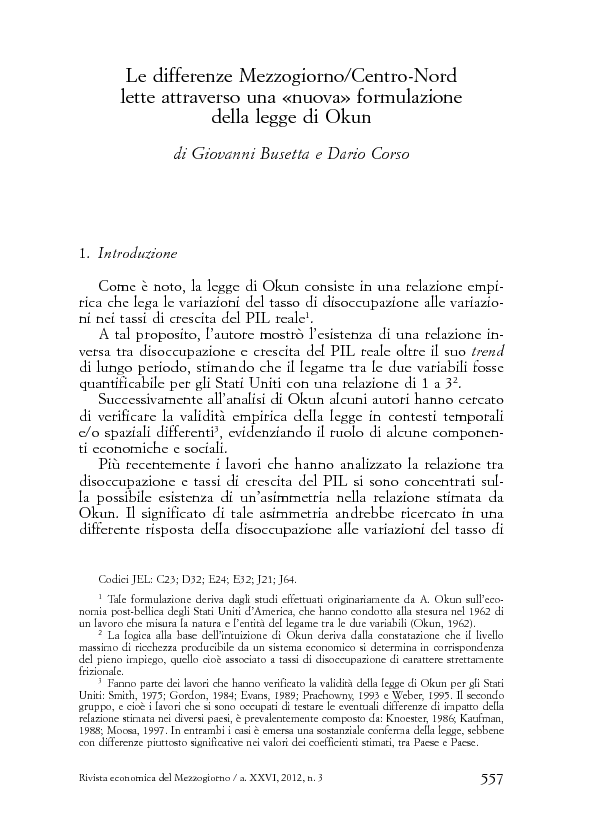