This paper focuses on the role and importance of the urban dimension in EU cohesion policy, even from a historical point of view. The analysis starts from the first Community initiatives (pilot projects, Urban, etc.) and lasts until the beginning of the planning documents of the new round of Structural Funds 2014-2020. An important step of this process has been the inclusion of the urban question in the «mainstreaming» of regional operational programmes (so-called ROP ERDF). In Italy, the Axis Cities of the Community Support Framework 2000-2006 was a turning point: the integrated territorial and/or urban projects have been the main instrument for the implementation of an intervention to be validated by an economic and social partnership and provided with substantial financial resources. Even in the subsequent period (National Strategic Framework 2007-2013), urban priority got its programmatic visibility and adequate financial resources. In this case (ROP Campania ERDF), the Region has delegated the management directly to beneficiary cities while the project Park to be financed had necessarily to be framed within the framework of a Strategic Document stating both development objectives and expected results. This experience, however, has benefited from the measure launched by CIPE in 2004 to allow even in the cities of the South of Italy to adopt strategic plans consistent with the provisions of EU regulations. A central chapter of this paper deals with the effectiveness of these policies. The author emphasizes that the results to date are to be considered unfortunately «well below expectations » and, briefly, shows the reasons that, in his personal opinion, negatively affected especially the implementation processes (from the difficulty of absorption of the resources available). In the final part the reflection moves on the claims the European Commission addresses, for the future, to Member States relating to urban development: a list of cities where to invest, a financial reserve, the additionality and concentration of investments, an integration of interventions, full managerial independence of the city authorities. The negotiations between State, Regions and Local Authorities should generate, finally, the creation of a National Operational Programme (NOP) dedicated to metropolitan cities. 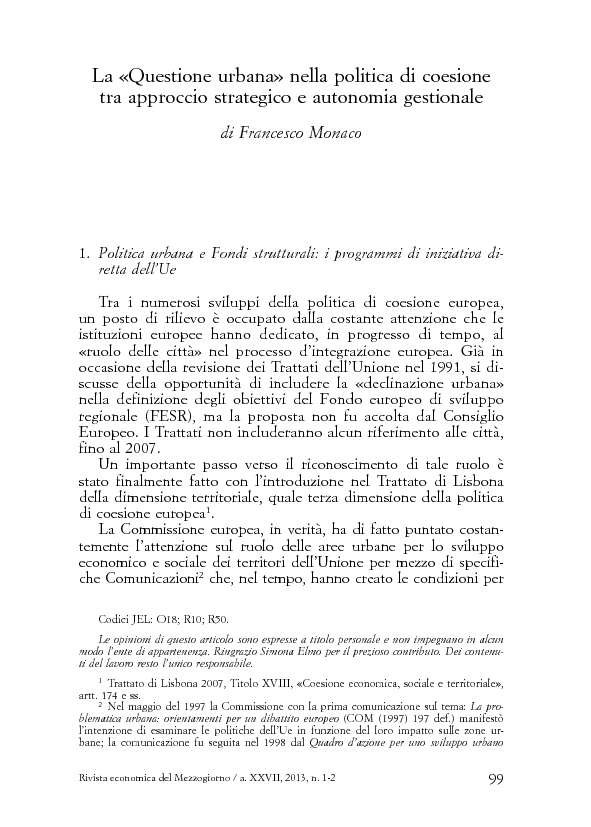