This paper starts with a critical review of Felice's volume ("Perché il Sud è rimasto indietro", Il Mulino, 2013) on the interpretation of the reasons of the gap between North and South, as well as with the scientific debate dealing with public law where it is inserted and that has followed. The critical reconstruction of this literature allows to develop a mistakenly marginalized interpretative thesis, that is the role of public policies, their implementation and their effects on the dynamics of convergence and divergence between the macro areas of the Country. Starting from there, it offers a reconstruction that focuses in particular on the first two decades following the Second World War and that spreads until today: the effects on the development of southern Italy of policies known as «extraordinary intervention» before their «degeneration» are highlighted and it is noted how the moving back of the South over the past decade is related to the limits of the so-called New Programming and to the asymmetric impact of national and European policies, whether pursued or missed, in the aftermath of the 2008 crisis. The link between policy and politics is also pointed out and, in critical reference to Felice's, the responsibilities of national leadership, alongside and in addition to the local ones, are shown. In conclusion, with reference to these two different seasons of policies focusing on southern Italy, the categories of active and passive modernization of the South are brought into question again. 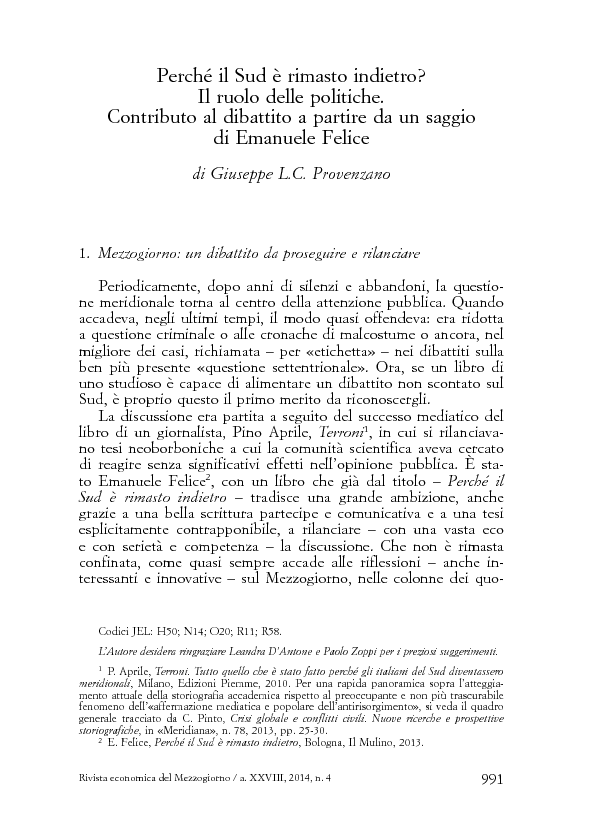