The revealed attractiveness of Southern Italy was generally analysed focusing only on one of the dimensions of attractiveness, that is only on a type of significant incoming flows (investments, tourists, talents, students, companies, etc...). For example, there are various analyses and studies concerning the attractiveness of foreign direct investment (FDI), and the tourist attraction of South Italy. Given the increasing importance of interregional and international mobility of people and companies aimed at stimulating economic development processes, it may be worthwhile examining this phenomenon in an integrated and multidimensional way, to evaluate and interpret Southern Italy's overall, global attraction capacity, whether compared with the other macro areas of the country, and focusing on the attractiveness of its regions. This paper aims at analysing the revealed attractiveness of Southern Italy, on a national and international scale, on the basis of an appropriate composite indicator that synthetises the different dimensions of attractiveness (the different types of flows), whose building is based on the main methodological approaches defined in the international literature, favouring a participatory approach. From the mapping and analysis of the results at Italian regional and macro- regional level predictable patterns emerge, and others more surprising. The traditional North-South regional development pattern, for example, is not fully consistent with the findings presented. The geographical distribution of attractiveness appears much less simple than other geographical distributions that typically describe the Italian economy and society. The South itself appears to be somewhat differentiated, thus contradicting a tendentially homogeneous image that tends to emerge from other analyses. Unless we focus on the ability to attract at an international level, where instead a large part of the South appears to be more uniformly behind. 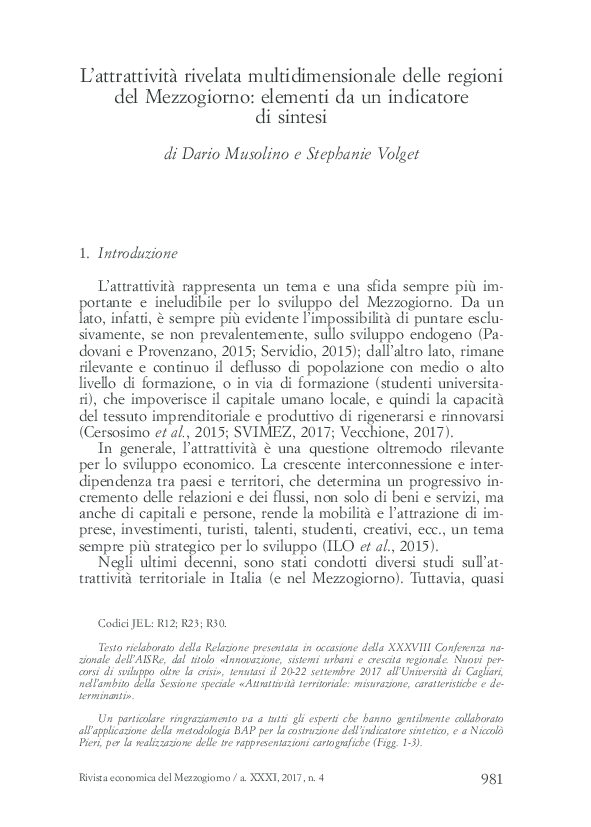