This paper discusses the crisis of the Apulian economic system over the last decade and the prospects of its overcoming, starting from the capabilities and the difficulties of its territories to actively connect to the ambitious challenges posed by markets, technologies and movements of society. In particular, we consider Apulia's districts, firstly in the framework of the Mezzogiorno, and then of the manufacturing industry, which is differently linked to primary and tertiary sectors. The answer to the many challenges has had various connotations in the Apulian districts, where different local and organizational and sectorial mixes have been combined with the policies of the Apulia Region - for example, those favouring the establishment of the so-called «production districts». In this context, the case of Casarano's shoe district is investigated. First of all, the reasons and causes that led to the development of the footwear industry in the Casarano area are considered; then the evolutionary trajectory of the district as well as the strategies adopted by the various entrepreneurial and institutional actors to try to recover from the crisis of recent years, unprecedented by intensity and length, are analysed. The prospect of a transition of districts towards more open structures emerges as particularly interesting, whose development depends on the capacity of local actors to organize, actively manage and give meaning to innovation projects within national and international production chains. 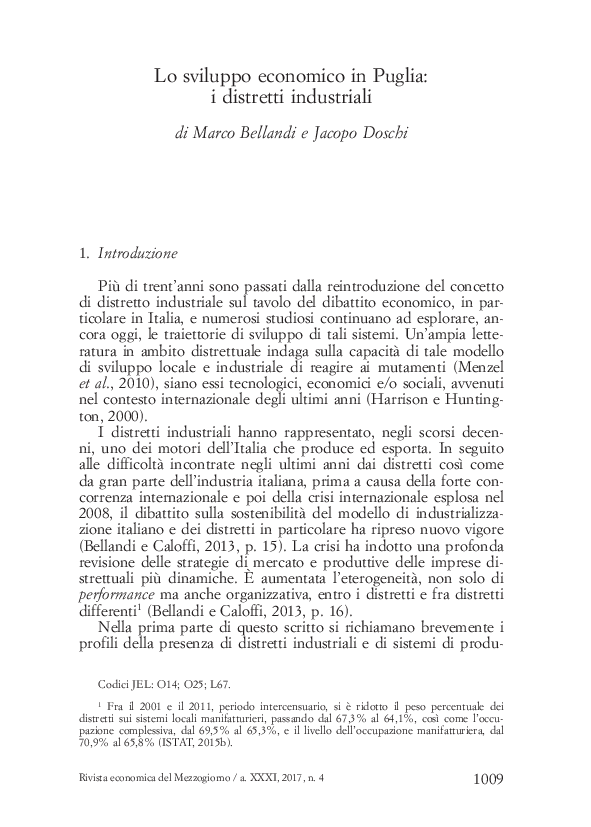